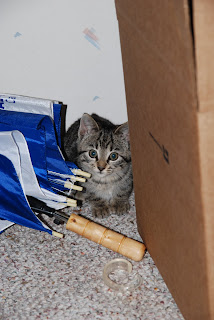 There are a few new players in the game. One person who figures rather prominently is Jesse. Jesse is Bob's second cousin or something - his grandma's sister's son, I think. He's also a fairly near neighbor, and the music director/leading deacon at our church. The children think he's great, and Bob and I are fond, too. Jesse was Bob's first non-immediate relation to learn my name.

A few weeks ago, Jesse asked Bob if we were interested in a kitten, as he knew a guy that had a few. Having just finished cleaning out the kitchen cupboards, complete with 3 dead mice, we had already decided a cat might be a good thing. SO we pretended we stood a chance against free kitten, and decided we'd take one when we got home after Christmas, preferably a striped one.

Jesse delivered the kitten, and we all liked it very much (see earlier post about it hiding for an hour). Bob thought it was a girl, and I named it Tiger. We set up a litter box, food dish, towel, and water dish in the bathroom where Tiger could stay at night or while we are gone. Tiger took to the litter box right away, and after just one feeding of the wet cat food Jesse brought, learned to meow at the fridge and run to the food bowl.

Yesterday I discovered Tiger is a boy. The name works either way. :-)
Posted by MamaOlive at 04:32

I simply can't resist a good cat story. ☺ And boy or girl Tiger is super gorgeous.

We're still debating the merits of acquiring a cat and/or dog while caring for our first newborn (premie) baby, and living in our first (brand new) house, with a relatively tiny yard...