Words are fast failing me as it's already getting late and we haven't been sleeping well for a week or two. But I wanted to share some stuff... I'm positive there were at least three posts worth... hm. Anyway, we worked on the "closet" some this week. 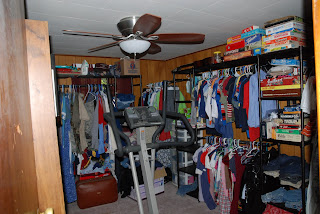 The cukes are still doing well, and the tomatoes are over my head. This was one day's haul. 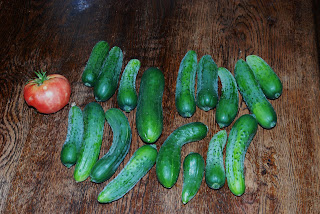 Today we went to the fairgrounds to check on our entries. There were a couple of frustrations, for instance Naysha took a picture of Taryn goofing off in the back of the van, and entered it as "People" (not posed). She got a white ribbon (here every entry gets a ribbon - white is close to being disqualified and not to be confused with third place), and on the comment section the judge wrote "this WAS posed." But we knew it wasn't, so we didn't have to feel bad about getting poor marks. Naysha got Grand Champion on her 4-H pullet chain hens, and Taryn got Reserve Grand Champion. (They were just the first 8 hens that Bob grabbed to take up there. But apparently they were our layers, because we went from 6 eggs per day to 2.) Naysha got Reserve Grand on a photo. I got Grand Champion on my watermelon rind pickles. And several entries got 1st or 2nd place. Made me happy.

So the other things to mention were the washer, but that gets a whole post, and our bedroom, but I need pictures for that. So I guess that's it for now. 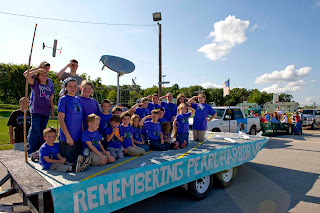 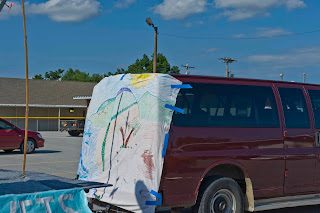 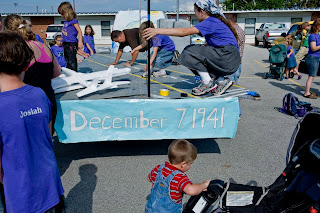 Apparently you have to type something to go with the pictures or they all just disappear. Trying again.
Posted by MamaOlive at 23:14 2 comments: Links to this post

Today was the parade, and official start of Madison County Fair.

Our 4-H club had agreed to do a float for the parade. We volunteered our trailer, and therefore became the principal players. For the last two weeks or so, another family has been coming over to help build the stage. The theme of the parade was "Hawaii" and we decided to do a memorial to the veterans of Pearl Harbor. What we ended up with was an aircraft carrier, with planes on deck and overhead, control tower with rotating satellite, and a backdrop of Hawaiian islands. Banners declared our club affiliation and our float purpose.

It was a lot of work for a few people, and the occasional feeling was hurt, but we pulled together in the end and got it done.

Our float was awarded second place, with the Boy Scouts coming in first (they had a tent and campfire - not sure what else). I got to drive the van, pulling the trailer; Elijah was in his seat, William rode with Bob in the Mini, and the other children were on the trailer. We waved and threw candy. It was fun, but slightly hot, and now it's over. We took some pictures; maybe I can get some from Bob in a day or two.
Posted by MamaOlive at 04:36 2 comments: Links to this post

I know that many churches "do" baptism differently than we do. I understand that some baptize infants because they believe the act imparts grace to the child and helps on the road to salvation. Some baptize infants because they view it as a sign of the covenant between God and His people, something like the OT circumcision. I can see the merits of both of these arguments, and I'm not here to say those ideas are wrong; I just want to say why we do things the way we do.

First, why baptize at all? This is actually the harder question for me. It's just one of those things that churches do. So let's dig a little... The first time we hear about anyone baptizing was John as "Mark 1:4 John did baptize in the wilderness, and preach the baptism of repentance for the remission of sins." I'll be honest: I don't understand how getting wet remits ones sins. But I'll accept that baptism is a symbol of the spiritual work done in a person's life.

Second, why "believer's baptism"? We believe that baptism is symbolic of repentance and faith in Jesus, and only a person of certain age and mental capacity can experience those. Therefore it is fitting to baptize people who have professed faith in Jesus and repentance of sins, as "Acts 2:41 Then they that gladly received his word were baptized: and the same day there were added unto them about three thousand souls." And "Acts 8:36, See, here is water; what doth hinder me to be baptized? 37 And Philip said, If thou believest with all thine heart, thou mayest."

Third, why immersion? It's my understanding that the word baptism actually implies immersion. But beyond that,
"Romans 6:3 Know ye not, that so many of us as were baptized into Jesus Christ were baptized into his death? 4 Therefore we are buried with him by baptism into death: that like as Christ was raised up from the dead by the glory of the Father, even so we also should walk in newness of life." Immersion best pictures the death and resurrection, at least to me.

I think that about covers it. Thanks for sitting in on my lesson. :-)
Posted by MamaOlive at 04:03 3 comments: Links to this post

Why is it baptism but baptized? Seems like it would be s or z in both words.

I want to do this properly, but I see that several people have checked on the blog in the last couple of days, so better get something out there.

Today our church had a baptism, and Taryn, Naysha, and Riah were all baptized by Bob.

A brief how and why, because I understand that other churches do things differently.
How is easy - we have a small building, so no built-in pool. So we have an old-fashioned meeting on the river bank, and those giving and receiving baptism go out into the river. Today we had our regular meeting inside the church, sandwiches in the fellowship room, and then carpooled to a private river access about 8 miles away. There was a sermonette, a couple of hymns, and then into the water.

Bob says he's ready for bed, so the why will have to wait. I hope to get back tomorrow, but we have a lot planned already.
Posted by MamaOlive at 05:09 3 comments: Links to this post

Did you want to know how Thursday went? To keep it short, we had our cousin Betty and her granddaughter McKenna come over to keep the children out of the way. It helped a lot. They came about 9:30, as we expected the movers about that time. Well, about 10:30 I called the company, and they said the truck should be here about 1pm. So Betty went back home to get her laundry done; McKenna stayed to play. About 2:30 the movers called from Springdale to let us know they'd had a flat and would get here as soon as they could. At 5:00 Bob called the company, and they said the guys were on their way, and we weren't to worry; we'd still get a full-service job. At 6:ish the truck showed up. It was a full size flat-bed semi, and the driver didn't think he could make it up the driveway, though Jesse (who came over after work) thought he should have tried.
Anyway, it was nearly 7 before they got the first load onto a dolly and up the driveway, and it was about 11:30pm when they left. Bob and I used our flashlights to illuminate the crates and the ramp as the guys unpacked everything. We were cordial, as we knew the whole thing wasn't the fault of the actual movers, and they were very glad that all they had to do was stack things in the garage, and were very careful and friendly. The girls went to sleep about 10, on the floor of our family closet, and the boys finally conked out on the sofas. Bob and I made it into our own bed at midnight.

Do you want to know how Saturday went?
Bob and I woke up together, and I planned to walk the dog while he supervised the children. Except the leash is in the van. In the shop. In Springdale. So I went out anyway, to teach her to play fetch. But the cat interrupted, and then Bob did. So I went to pick cucumbers; got 16! But didn't start pickles because I wanted to take some fresh to church lunch Sunday. I made a pasta bake to take, and after it cooled I went to put it in the fridge. First had to remove the old dehydrated grapes - you know, the package we bought the day after everyone stopped liking grapes? So I set them on the floor as I made the switch, but Elijah came and started on the grapes. I told him no and took it away, and he immediately did a handstand in the pasta. Then I went outside for some fresh air, and found a half load of laundry souring in the basket. The girls got distracted while hanging clothes. The GM place called, and they can't figure out the van, so Monday they will send it to their diesel tech in Siloam Springs. All day we were waiting for MIL to come over, as she indicated she'd get some groceries for us and come look at our home improvements. But she finally called to say it would be Sunday before she could make it. Someone got in the building and knocked over 2 bookshelves. .... That's just the way it was. Then Sunday night Jesse preached about being content because we have Jesus. (Hebrews 13:5). So I'm not complaining, I just wanted to let you know how Saturday went. Cause, you know, people tend to think we're perfect. HAHAHAHAHA Yeah, we don't have to deal with that one.
Posted by MamaOlive at 17:23 4 comments: Links to this post