Look what I did 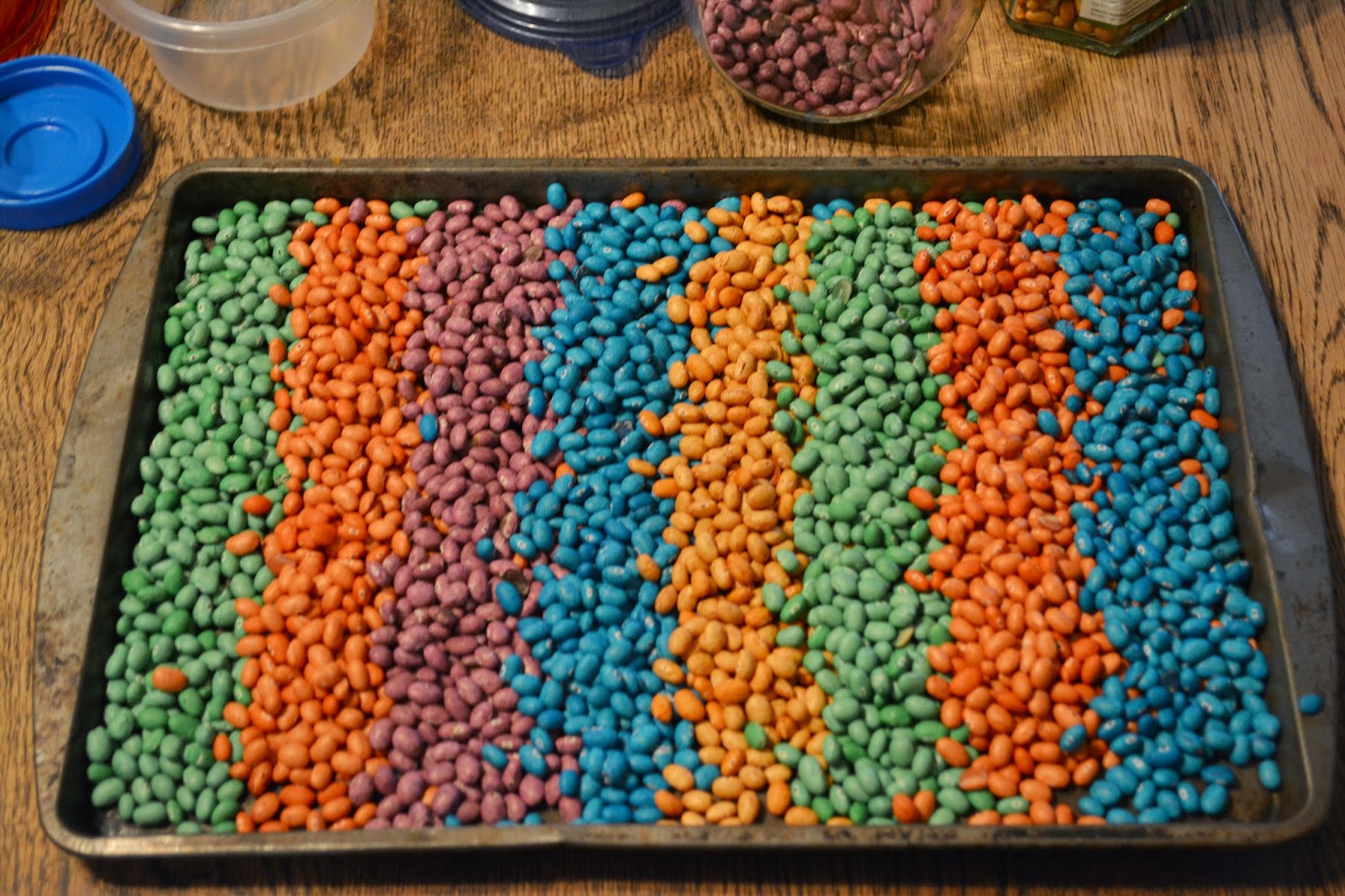 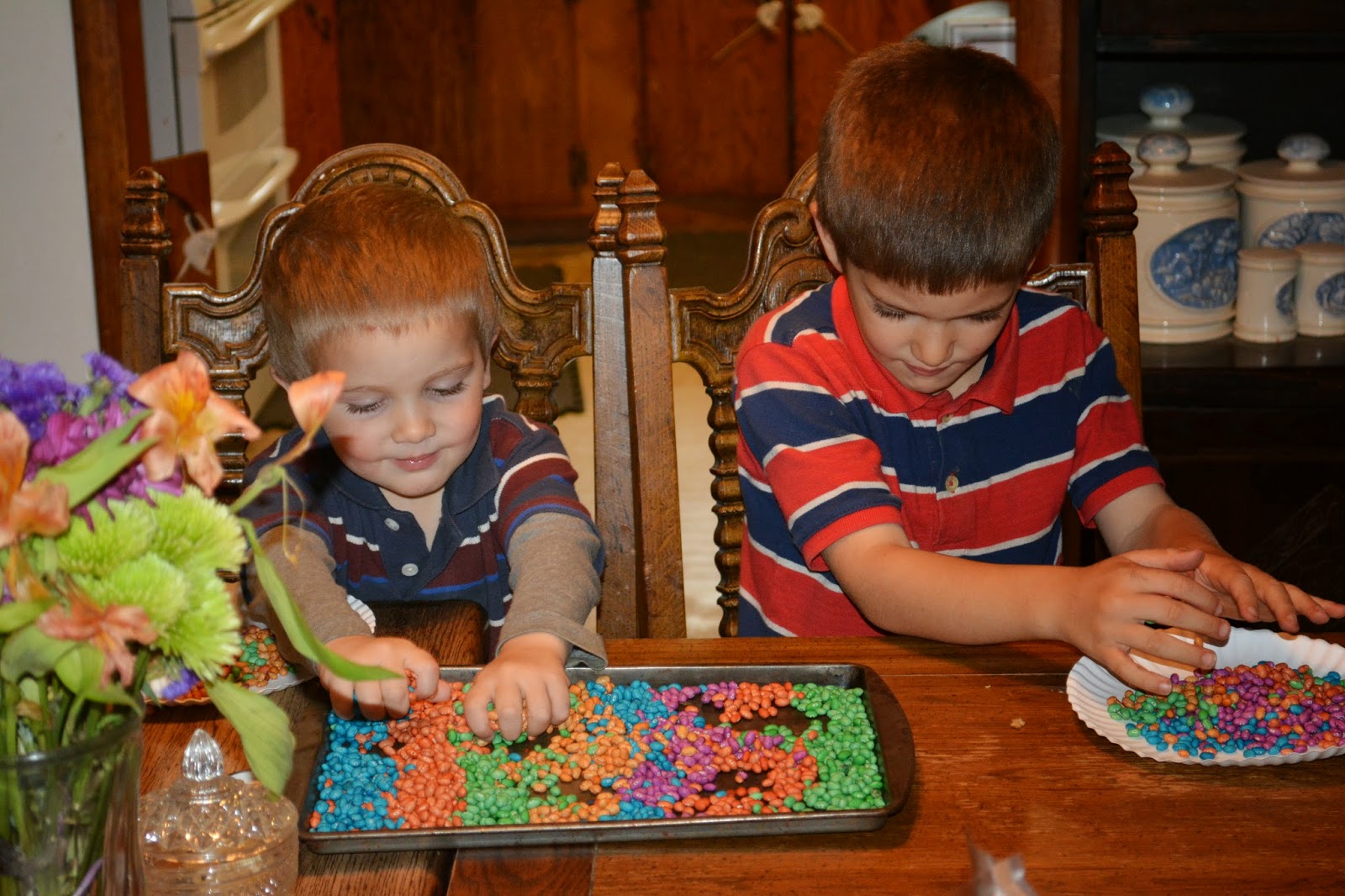 Okay, so I can't get the text above the pictures. hmm?
Anyway, I was web-surfing the other day and found this "blog" http://www.funathomewithkids.com/

The author there has many fun and interesting ideas/experiments etc. I browsed through and opened a dozen tabs of things that looked interesting and/or doable.

And THEN, I - I don't do crafts - me, did something!!! I had a package of Navy beans (which are white, by the way) and food coloring, so we did colored beans. It's very simple. 1 cup of beans, 15 drops food coloring, shake for 20 seconds (in a baggie or storage container); leave to dry on paper towel. That's it.
The children thought it was VERY interesting that I would do such a thing. They have had fun playing with the beans every day since. 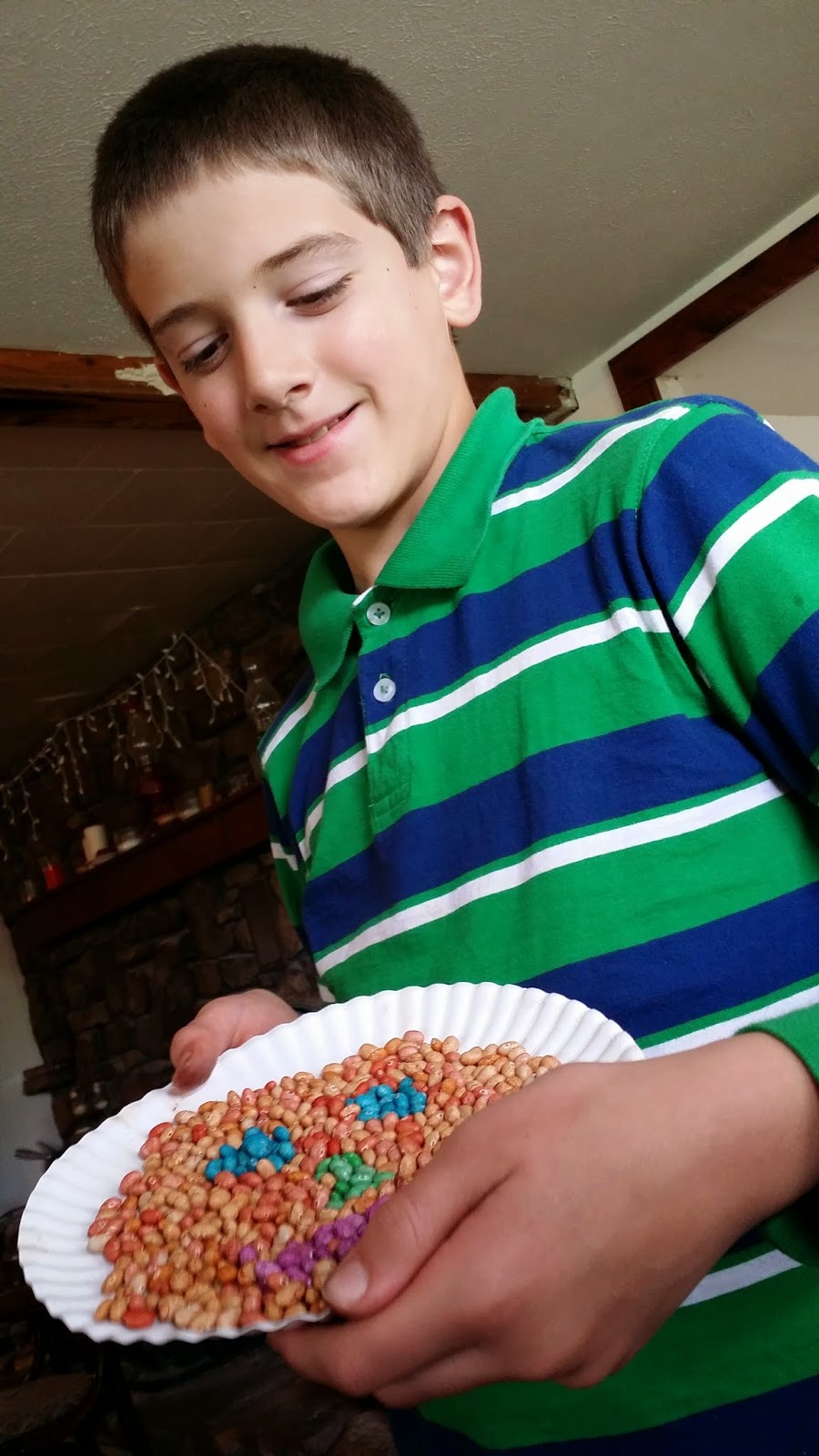 I'm so proud of myself that I bought liquid starch to try the slime recipe soon.
Posted by MamaOlive at 03:46 2 comments:

For the past 2 years (approximately) I have had intermittent "difficulty swallowing." Combined with heartburn while pregnant, I supposed it was a sort of GERD, but when I described my symptoms to our pharmacist he looked rather puzzled and suggested I see a doctor. That's when I found out I was expecting Ruth, so it waited. My symptoms? Occasionally, at the beginning of a meal, I would suddenly feel full and rather like I was choking, with a distinct feeling of the food getting half-way down and hitting a burp that was half-way up, each blocking the other from going where it needed to go. My mouth would water and I just tried not to panic while waiting for something to give way. At least twice the only solution was to throw up.

Finally I did something about it. The same day I had my ear mole removed, I talked to my doctor about this issue. She sent me for a Barium Swallow, which wasn't terribly unpleasant, and turned up a hiatal hernia and a "ring around" the esophagus. So they sent me up the river, er, I mean, for more tests.

The other day (2-3 weeks ago) I had an EGD. I was put to sleep, had a camera pushed down my throat, and several pictures and biopsies taken. A few days later I got a letter saying they had diagnosed me with "allergic esophagus" and that I probably had an unknown food allergy. The recommendation was for an allergy elimination diet to determine to what I am allergic.

I considered just going for testing at the allergy clinic, but according to what I read, the tests are most effective when coupled with the experience of the diet. Plus, going is expensive. Sooooo, I am on the diet. No eggs, milk (or dairy), wheat, soy, nuts, or fish. Those are the most frequent offenders. To be on the safe side, I've also cut out (most) corn - I still allow a bit of vinegar and dextrose - as well as coffee and chocolate (since those aren't any good without milk anyway). The idea is to rid the body of all traces of whatever is bothering it, then to eat a possible offender 2-3 times in a day and see if it causes a reaction.

Most folks say it takes 7-10 days to get relief of symptoms; I'm on day 12 now and it may be getting better. Being the unobservant person that I am, I want to make sure things are better before adding back in any of the possible offenders.  I am writing down my experiences each day. So far I have lost 11 lbs. If it were only possible to maintain such loss! I'd be at ideal weight in 3 months! But I doubt it's possible. Anyway, I wanted to say this has been different for me than previous attempts at dieting. Mainly, I suppose, because it is for medical reasons and not for losing weight. When I'm cutting calories, it's easy to get stressed out and go ahead and grab a chocolate, telling myself that I can get back on the path tomorrow (or even that I didn't eat some earlier, so it's still less than what I used to do). With the allergy elimination, though, the effect has to accumulate, so I knew if I cheated I would have to start over and go through it all again.

As you may imagine, this diet is quite restrictive. The hardest part is not being able to just pick something up and stick it in my mouth without thinking. I can't lick mixing bowls or take the extra bit from Daniel's plate, or anything! I can't help but wonder if that's where the weight loss is coming from. But I have noticed a change in my stools, so I think there has been a change in my gut, which is a good thing, and probably helpful, too.

I did some creative shopping and managed to make snickerdoodles. I used a recipe from my mom, but with a few modifications. Instead of butter, I used applesauce with a touch of olive oil. Instead of flour, I used whole oat flour. Instead of eggs, I used flaxseed mixed with water. Instead of buttermilk, I used a bit of vinegar (I could have put in water, but the dough was thin already). I knew chilling would not stiffen the dough as if it had butter in it, so I just scooped it onto the cookie sheets and sprinkled sugar/cinnamon over the top. They turned out really great! Bob said he doesn't usually liked baked goods with applesauce, but he liked these. I also found an oatmeal cookie recipe where the only substitution I had to make was for the eggs. It was nice to have something sweet and munchable, but I don't pig out like I've done in the past.

I have noticed the last 2 days that I haven't felt so bloated and belchy and chokey. Today I was able to chug a glass of water without it going down in gulps. I can't remember when I last did that. So a couple of more days to be sure and then I'll have a glass of milk.

Forgot to mention that the fist 5 days I had a raging headache, was irritable and sweaty. I've had backache for at least 2 weeks but it was better today. I had been taking  Claratin for several months, but stopped that a couple of days ago as I'm very congested anyway. When I skipped it the first day of the diet I got very wheezy, but am not so now.
Posted by MamaOlive at 02:49 3 comments:

I'll try not to give a narrative, as I want to remember the facts!

Ruth lacks a week of 7 months, and her favorite pastime is standing up. SHe pulls up on everything and tries to walk by looking intently at her goal and flapping her arms.

April 1st we drove to Sallisaw, Oklahoma, and bought a 12 week old standard poodle. She is officially Naysha's dog, and is already house-broken, comes when called, sits on command (for Naysha) and is learning to heal, stand, fetch, and stay. She had been kept in a pen of shavings in a garage, so that makes the learning all the more impressive. She doesn't cry all night any more, but still wakes us up early in the morning.

Resurrection Day was a lot of fun. Riah and others got a Mario Bros chess set, and they are all learning how to play. Ced got a Knex roller coaster, and William got an Angry Bird flying swimmer. There were lots of books, water bottles, Bible covers....

We went to the Medieval Fair in Norman this year and got some new costume gear.