My local weather info can be found here. I was hoping to find a similar graph for other areas, but apparently the Tulsa office does this chart just for its area.
http://www.srh.noaa.gov/tsa/?n=climateGraphs

I did work up this info for Waco, TX:
http://forecast.weather.gov/product.php?site=FWD&issuedby=ACT&product=CLI&format=CI&version=1
It indicates that this year, Waco has received more precipitation than we have, though our average is about 14 inches more than theirs. So yeah, drought.

Posted by MamaOlive at 04:48 No comments:

I feel like I tend to look at things differently than "normal" people do... Why not embrace the weird?

We've all heard the slogan, "Keep Christ in Christmas." Now, I'm not an idiot; I understand what people are trying to say (retain the religious significance of the holiday), and without going into history and true religion and all that (because I enjoy Christmas as much as anybody)...

The other day when I saw that for the hundredth time, the thought popped into my head, "Why not let Him out?" First, just as a funny - kinda like saying "Keep the Dog in the Crate!"

But then I got to thinking about it, and it does seem that many people really do want to keep Christ in Christmas. If they can go to church that once per year, sing a few moderately religious songs and feel vaguely sentimental or proud, then Jesus has served His purpose. I actually knew a woman who would say "Thank you, Baby Jesus" when something went her way. Babies are cute and safe, and it's a neat story about the shepherds and the wise men... Just don't go into all that "Lordship" business; keep Him in Christmas; that's where we like Him.
Posted by MamaOlive at 20:12 3 comments:

I feel like I should write a bit more about yesterday's post. Not a retraction, because I do believe what I said, but a disclaimer, because I believe so much more than that.

First off, I do really believe homeschooling is the best, if not only legitimate, choice for education. But it was wrong to imply that all children would be safe if they stayed at home. Of course there are accidents, murders, robberies, and even misguided SWAT intrusions of homes. But at least a parent who was there with his child could honestly know that he was doing all he could to protect his child, instead of hoping that someone else did.

Also, the world as we know it is a sad, sick place. Yes, God made it "very good," but sin entered, and then death, and it just went downhill from there. We are ALL 'evil' - not just those who go out and start shooting at people - and the only way to eradicate evil is to be wash it away in the blood of the Lamb. The dude in CT let go of self-control; I do the same multiple times in a day. His loss of control resulted in death, whereas mine results in obesity or hurt feelings or what-have-you. The difference is in kind, not degree.

The only way any of us can have any sense of joy or happiness is through God's graciousness towards us (saint and sinner alike). He gives good gifts to point us towards Himself.

It is only when we accept the drawing of God and yield ourselves to His will that we can be, not safe, but secure.  We know that all things work together for our good, and nothing can snatch us out of His hand.
Posted by MamaOlive at 04:23 No comments:

My attention span seems to be getting shorter. Maybe it's just that I have to cram a whole week's worth of thought into one quick post.

I found my dream house. Can't really put my finger on why, but I just LOVE this house. http://www.rightmove.co.uk/property-for-sale/property-36023545.html

Also, the shooting in CT. It is so sad, and if I stopped to think about the individuals involved I would be overcome with grief. But I don't want to do that, so... Everybody has a "solution" to the situation. Get rid of guns. Arm the teachers. Pay the teachers more. Have all schools on 100% lockdown at all times.  Yep, people are making impassioned pleas that our schools become even more like prisons. (google "schools like prisons" and see what comes up - an article I read not long ago is interesting if not concise: http://americanvision.org/6523/the-story-of-two-buses/ ) And my favorite, "hug your children."  Taken all together, it reminds me a lot of this song that we recently discovered and are learning to sing.

Anyway, today is baking day and I'd better get back in the kitchen.
Posted by MamaOlive at 18:07 4 comments:

Just checked Wil's Flickr and saw that he'd done his old apartment in PS. A few days ago I made up an economical dream house in 3D Architect. And then learned how to take and save a screen shot.  SO here ya go. 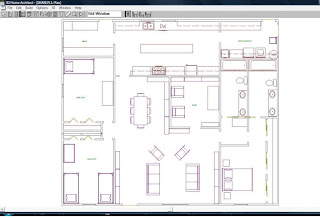 I never had flannel sheets growing up, but when I married, Bob insisted on flannel for the winter. I can see why. They don't have that shocking cold feel upon first climbing into bed, and snuggle closely throughout the night.  Anyway, our OLD sheets simply disintegrated last week, so when we were at Sam's club we bought a new set. I was going to link to the product, but they aren't on Sam's website (they are bad about that). Anyway, these sheets are AMAZING. So soft, and warm, and just everything you could want for cuddly comfort.

On the other hand, I haven't been enjoying them as I should be, since Daniel still isn't sleeping well with his new teeth.

I've discovered a blog called hugs and cookies that features an amazing-looking new ooey-gooey recipe every day. Will try one for Bob's birthday this week.

Things my mother forgot to warn me about: Beware of vacuuming when fresh out of the shower. No, not because of moisture and electricity, but because the uncombed hair just might flow onto the floor behind you as you crawl under the Christmas tree in search of a power outlet, and some unnamed young person just might have left the power switch on, so that when the plug is inserted into the outlet the vacuum comes on, makes a funny sound and begins to stink while you simultaneously feel a not-so-gentle tug on your scalp. Oh, yes.

50* is just about perfect for working in the garden. I've weeded, laid some path, raked, and spread manure this week. Winter is definitely the time for major works.

Elijah stayed dry for a whole day, so, as promised, we bought him underwear. Even went  the extra mile and got Angry Birds underwear (Riah is jealous). I have heard the word "underwear" about a zillion times every day since then. He does good until it comes time to do a bowel movement. He gets frequent showers now.

Braum's butter is much better than Sam's butter. Sam's is dry and waxy and isn't much cheaper.

Can't remember the other stuff.

In light of my sleep woes, I thought I'd share this verse.


Pro 27:14  He that blesseth his friend with a loud voice, rising early in the morning, it shall be counted a curse to him. 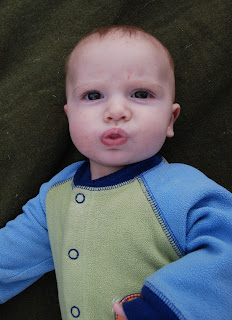 Daniel was feeling his teeth with his tongue. 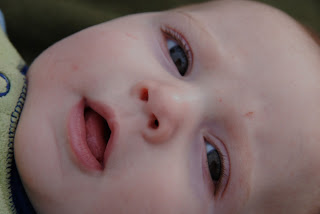 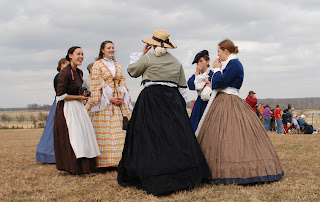 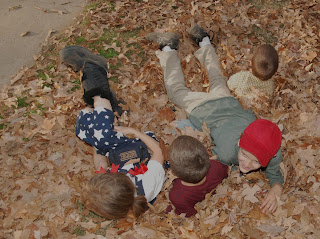 Elijah fell into a hole under the leaves and decided it was fun, so everyone else jumped in, too. 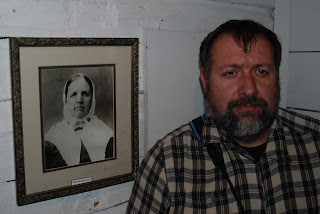 This lady shares Bob's last name. There's no record of relation, but I think they look alike. 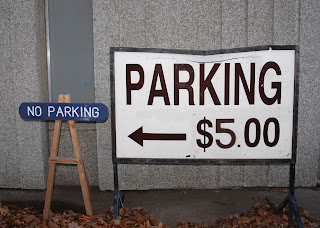 This was as we left; the signs had been set aside after the main event. I just liked the placement.
Posted by MamaOlive at 00:42 1 comment:

but mostly brain dead. Daniel is still working those teeth. Tuesday night was the worst, not average, but still ... I was in bed for 9 hours, and was awakened 5 times during that stretch.

I wanted to do a detailed post called "Why I don't like Apple" about how we got pictures onto the iPad, but I don't remember the details any more. Something about iTunes being Bob's default even though it says it isn't and he tells it not to, and discovering the iCloud, and going to set up the cloud on his PC where it said he already had an account, but had to change the password, and then still didn't work because you have to set it up on the iPad first, but it wasn't on the iPad even though Apple website says it is, and finding out we had to upgrade something first, which Apple says automatically upgrades, and then realizing we had to upgrade the OS before it would upgrade itself, and then losing all our apps, and then finally activating the cloud only to find out its only option is to automatically sync ALL the pictures and music every time it's turned on (and Bob has thousands of pics and songs on his PC), and then finding out we have to use iTunes anyway, and it only works if the iPad is plugged in, and then when we selected pictures it tried to do all the music, too! Still haven't got the cloud to work, but have been able to get two photo albums onto the iPad to show people who don't have a home computer.

Don't remember the other posts I've thought of doing.

Why doesn't anybody sell red Christmas lights? All the local stores are out. Finally found some on Amazon, and some organic popcorn. Which is also important because I learned how to make caramel popcorn that is fantastic. Thanks to a free Kindle book of popcorn recipes.

Went to a civil war reenactment that was fun, and I took some snapshots. But it's bedtime so I won't try to upload any now. gotcha! Maybe soon.

Goodnight.
Posted by MamaOlive at 05:39 3 comments: