Today I had a checkup at 9:20, which meant we left the house at 8:30. This was great fun, considering we don't normally get up until 8. But it went pretty smoothly.

I had decided to ask for another sonogram, as my doctor told me to, to try to determine the sex of the child. She was eager to have a look, so that's what we did. However, once again, we couldn't make out any details.

Meanwhile, Bob took the children shopping. He forgot about Krispy Kreme (we usually try to stop by if we're in the area in the morning, and get a free hot doughnut) and went to Target. Sent me a text, asking what we needed. So I sent him a short list, and asked about the doughnuts. So they went to KK, but the light was out so they didn't even stop. Went looking for other food and ended up at McDonald's. By then I was about done, and sent a text indicating so. 5 minutes later he texted, asking if I was with the doctor; I replied that I was finished. 5 minutes later he sent, saying they were at Sam's. So I said to go ahead while I waited, and sent a short list in two messages. 30 minutes later I was bored and said hi. He replied they were on their way out.

When they picked me up, Bob explained what they'd been up to, and that they didn't get my "I'm done" messages until they were leaving Sam's, and only got one of the two-part list. So we decided for urgent communication we should use voice calls.

Went to Target, where I wore myself out walking in giant circles, trying to find the laundry soap. They have "all" jeans on sale this week, and we got a pair for Elijah and William, but when we entered the toddler section it became apparent that they only have GIRL'S toddler jeans, not BOY'S. So poor Daniel will have to keep on with what he has. So I was frustrated by the time we went to checkout, and there was a line, but it was moving. Then a lady opened a register in front of the one at which I was in line, and called me over, but the guy in front of me pulled his cart up beside his wife, so I couldn't get past. So I tried to go around the side, but then he moved up to load in their bags so I couldn't get through there either! I just gave up and walked away, letting Bob (newly returned from the bathroom) handle it. Kudos to the employee, who moved registers to make it easier for us to get to her.

Then we went to Harbor Freight where Bob found some guy stuff. Then we ate lunch at Applebee's, where the food was very tasty in reasonably-sized portions (looked very small, but was about the right amount), but the poor waitress couldn't get anything to the right place.

We headed to Fayetteville for Taryn's allergy shot, remembered the diaper bag so looped back to Applebee's, got the shot, then over to Hobby Lobby. Got some photo mats there, but decided to wait on the chair cushion fabric.

To Lowe's for mini-blinds, then Aldi for tortillas and produce and ice cream. We'd now been out for 9 hours, so I also got some frozen food for dinner, and we headed home.
Phew.

Posted by MamaOlive at 04:40 2 comments: Links to this post 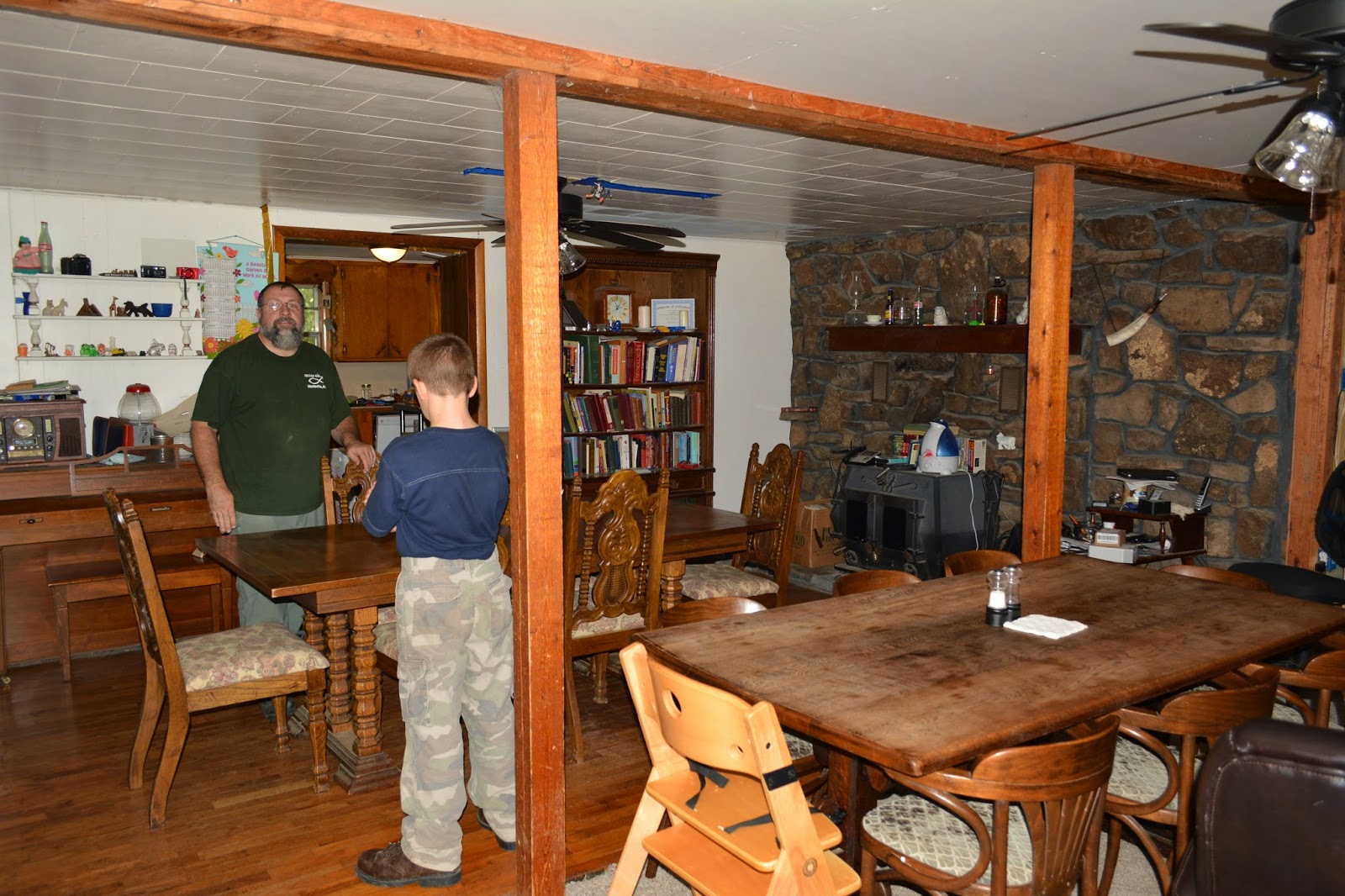 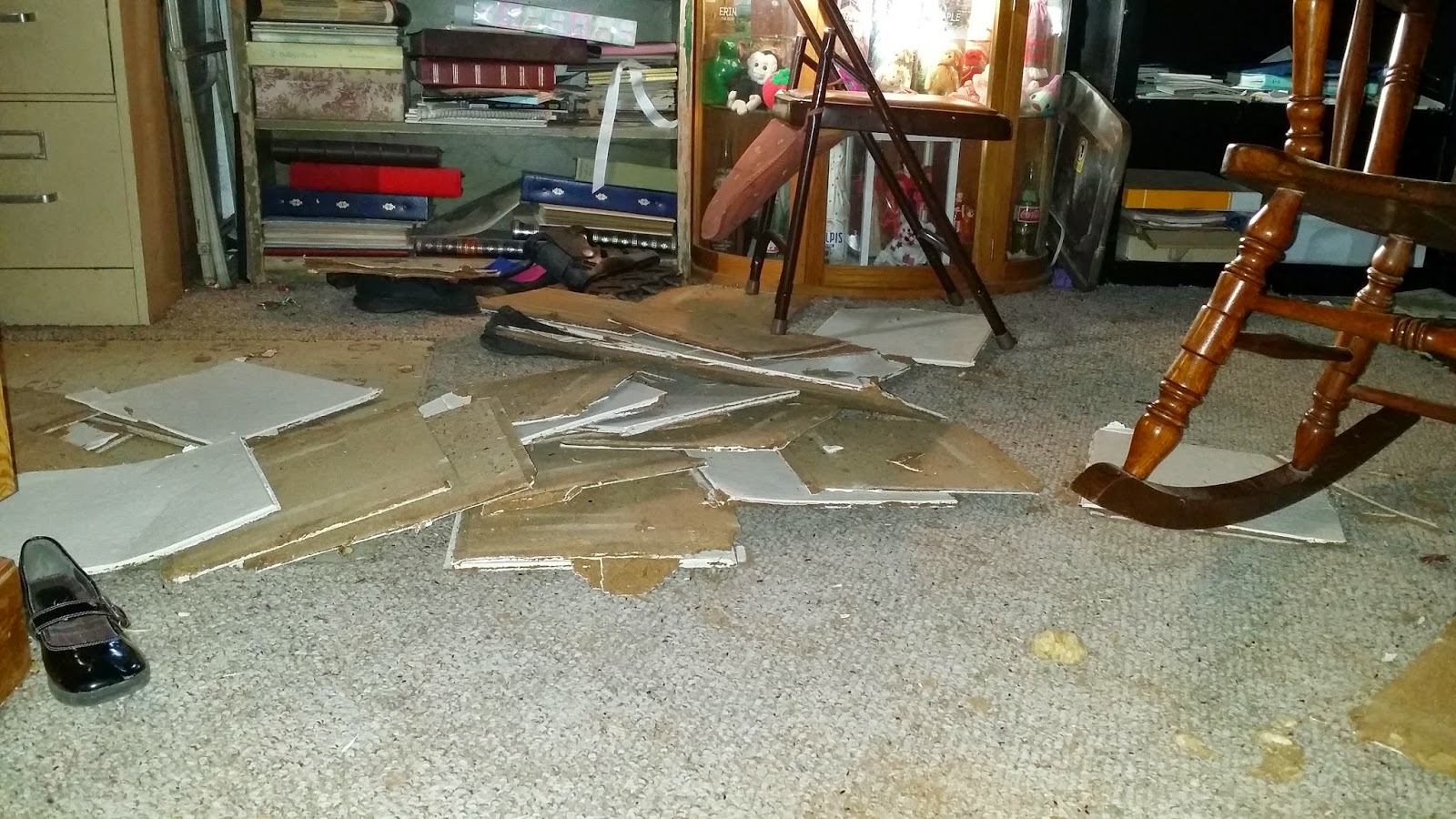 The ceiling tiles as they fell. 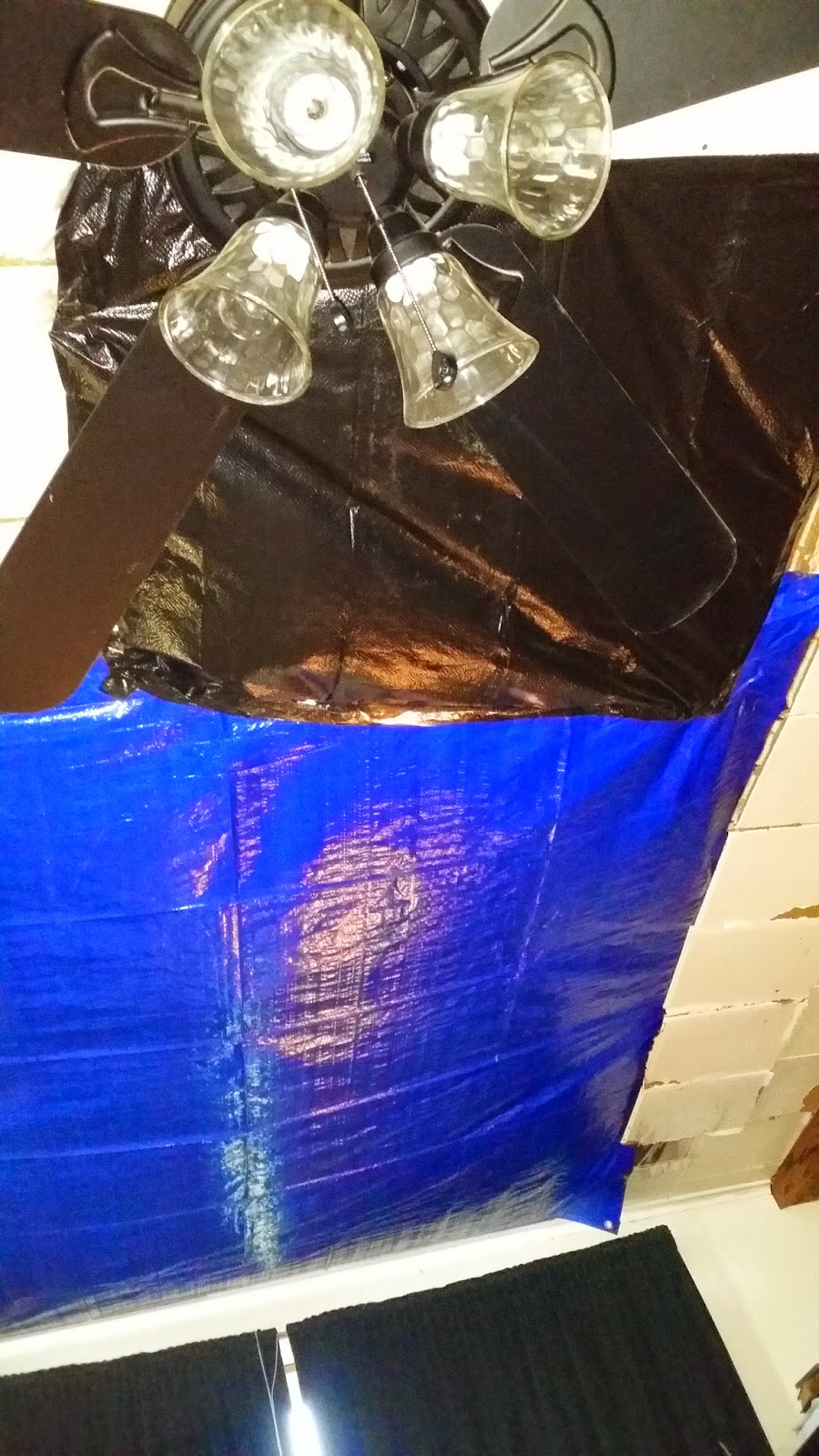 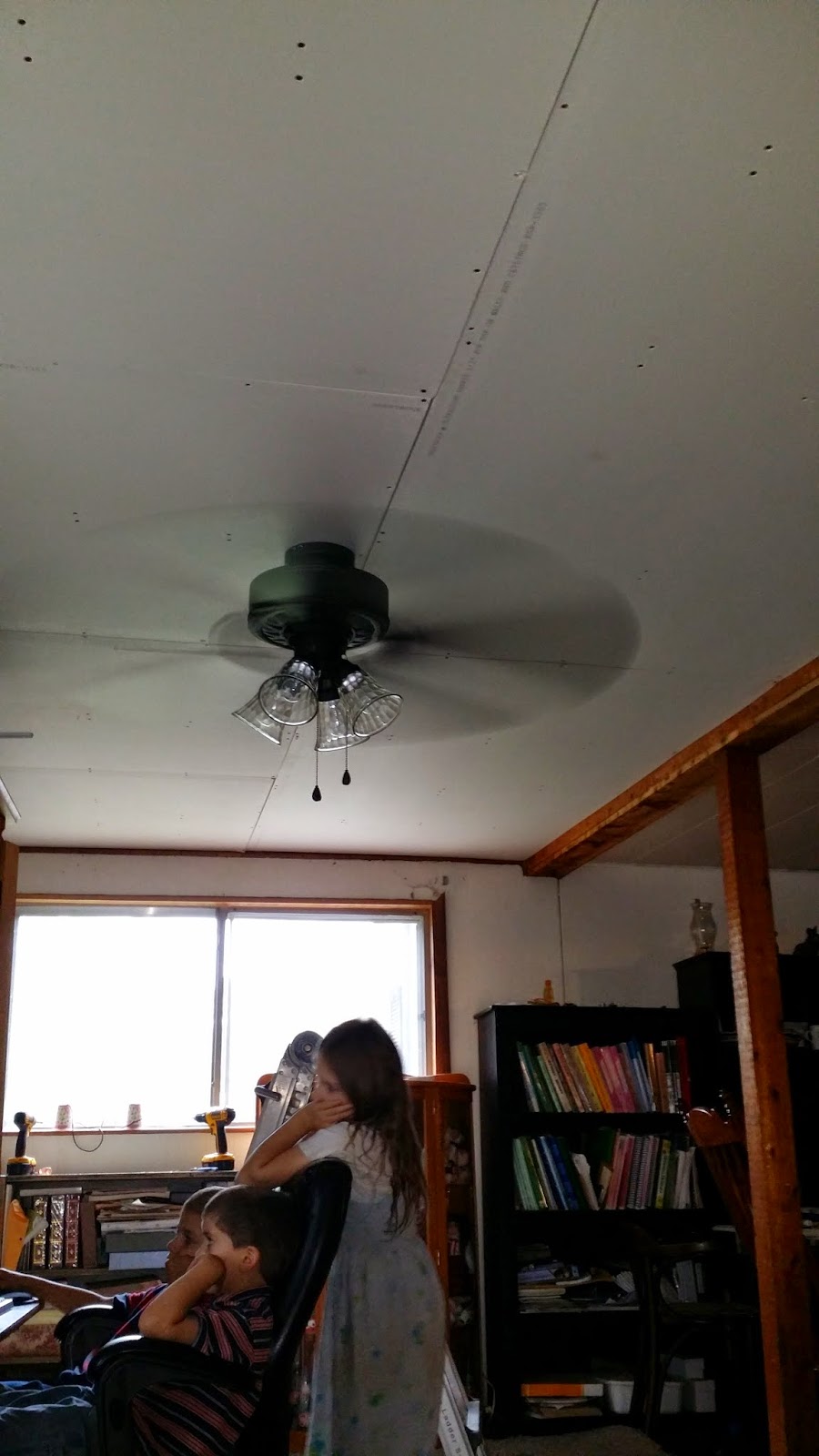 The new sheetrock (waiting to be tapes, mudded, and textured).
Posted by MamaOlive at 04:52 1 comment: Links to this post

One of those days

History:
Those of you who are on Facebook know that a couple of weeks ago (maybe not that long) Bob was sitting in his chair at midnight, watching tv on the internet, when the ceiling fell down. Well, part of it; we'd already braced up half the room when it was noticeably sagging. He made a lot of noise and woke me up, and we pulled down the defunct paper tiles and taped up a tarp and garbage bags to hold it together until we could get to it.

We thought it through and decided that we needed to make the addition - the living room - open to the house to facilitate the ceiling rebuild. So we (by which I mean Bob) put in a window A/C unit that we already had, cut up a couple of 2x4s and OSB sheets to make the back wall of the game closet and close of the living room (former carport) from the future library (former garage). We also put in the door between those rooms, which was quite trying, as every possible angle showed level, but the door wouldn't shut (he finally got it). Then we took down the temporary wall we'd put up when we stopped work 2 months ago between the living room and the dining room (former living room), and built steps going up from one to the other. Cleaned the living room of the dirt and construction materials, and moved Bob's chair and computer down there.

We got one full and two partial sheets of drywall/sheetrock up yesterday, and leads to today.

The children's toilet stopped up and Bob discovered that we only had a cheap, ineffectual plunger. So I was to go to Walmart for a good plunger, rabbit food, and a few other items while Bob pulled down more ceiling tiles and the boys pulled out staples. Except the van door was left open all night and the battery was dead. So Bob pulled his pickup around for a jump start, and after a minute of charging, his truck went dead. Out of gas! We had a gallon or two in a can (for the lawnmower), and that was enough to get things started again.

I made it to town and got the necessaries, but on my way to checkout I stepped on a frog! Ewwww.
Came home and Bob started plunging. Daniel was very interested in proceedings, until Bob got frustrated with him and shouted "get out!" Daniel replied, "Oh, MY!" and took off running. The plunger didn't do it anyway, so we had to use a snake, which finally did the trick.

We did get the rest of the ceiling put up, finding two dead mice in the process, and discovering that the room isn't square (no surprise there).  Got the ceiling fan back up (only dropped it twice), and even put in a new light and power outlet (only electrocuted Bob 3 times).  4 red wasps killed in the house; one fall off the steps onto the concrete; 28 instances of an outside door left open (at 90* and 200% humidity).

So not a bad day in all, just lots of little bits that added up to interesting.
Posted by MamaOlive at 03:21 2 comments: Links to this post