Obviously I'm not going into details, and I hope there is a trace of humor in my write-up, because, while nerve-wracking, the whole thing is so frustratingly silly when one steps back and looks at it. The worry is that innocent bystanders may have been offended or confused, but only time will tell if any damage was actually done.
Posted by MamaOlive at 04:44 1 comment: 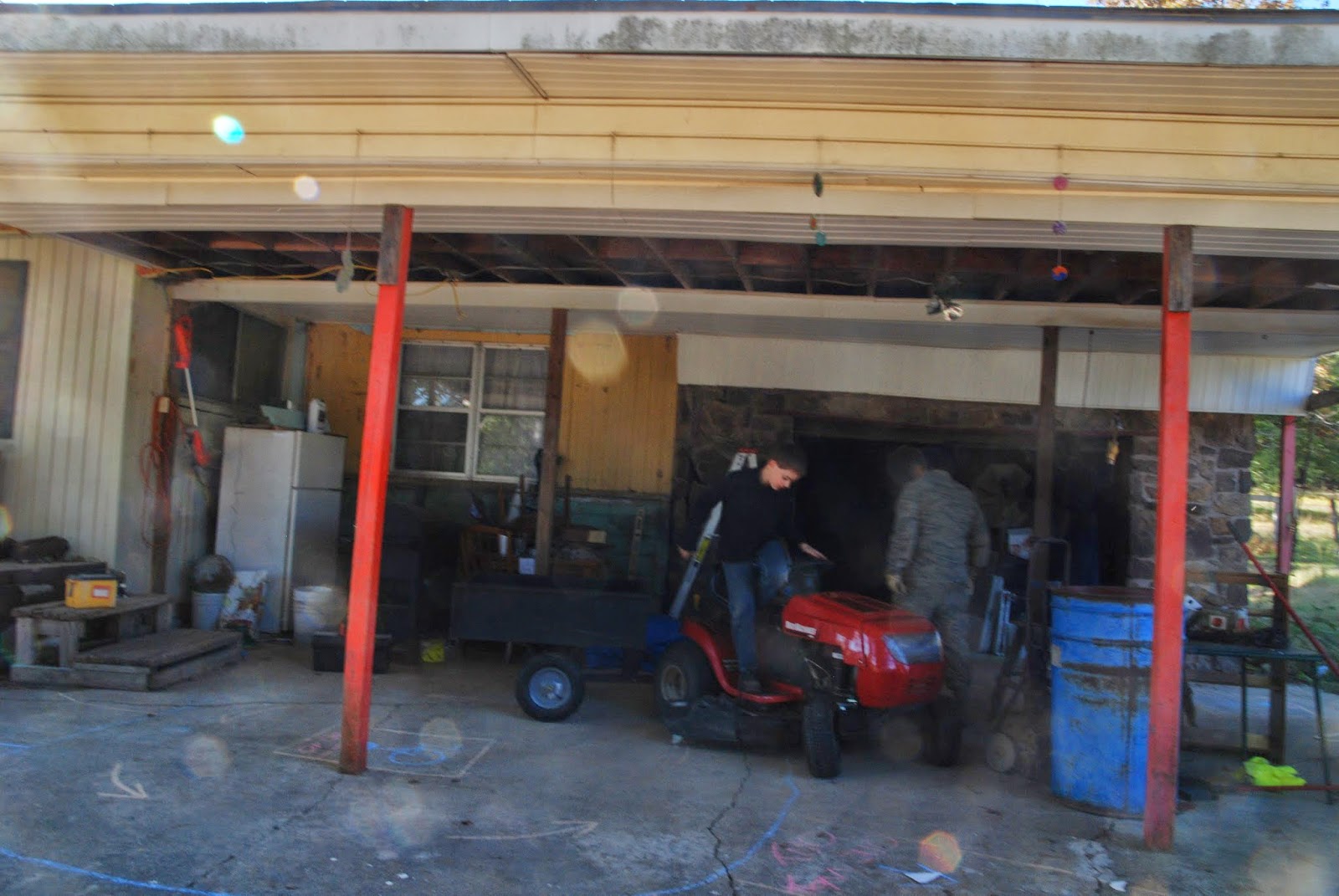 Bad picture from before the construction. 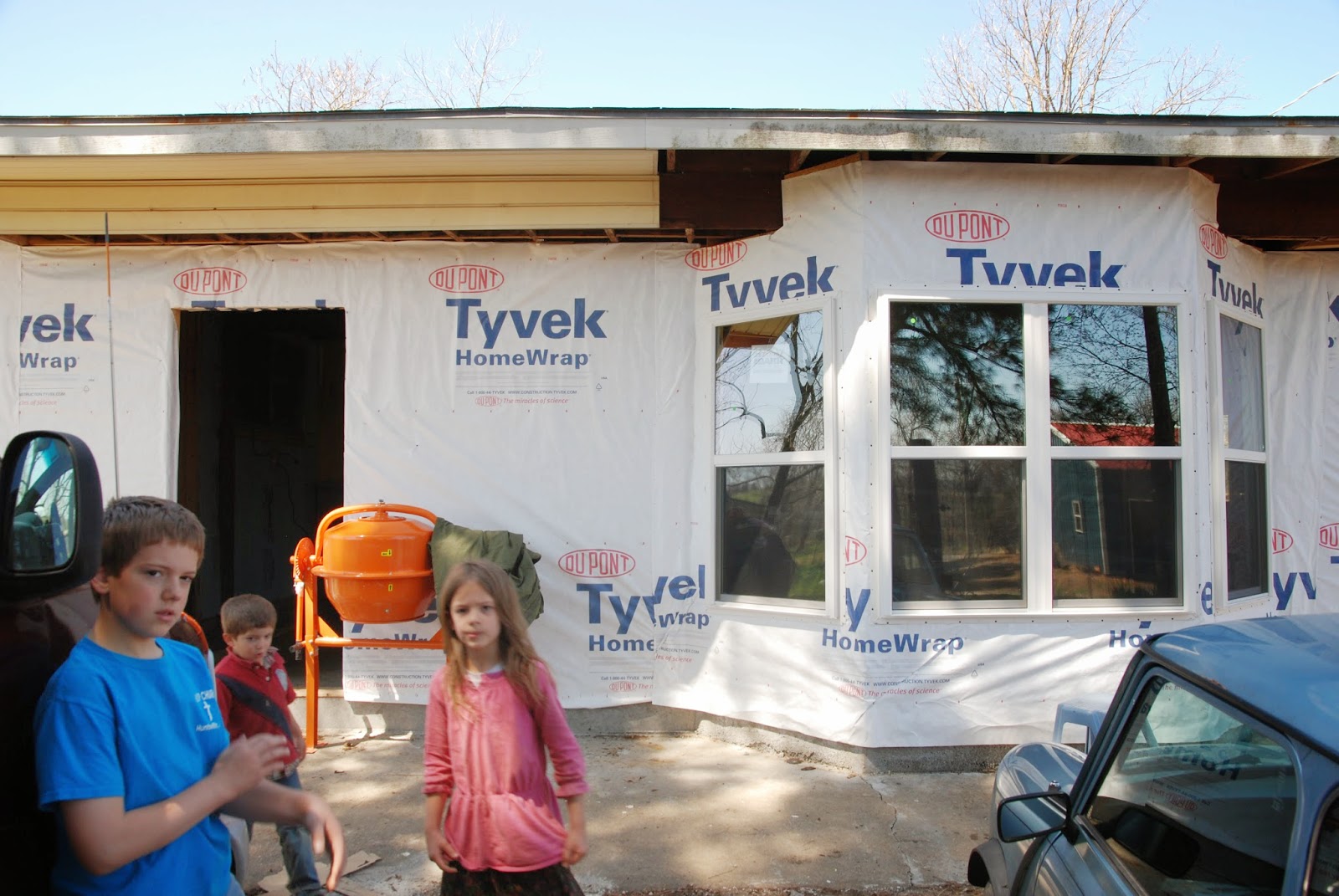 New windows from outside, today. I wanted between-the-glass dividers, but Bob convinced me they would quickly become dated. 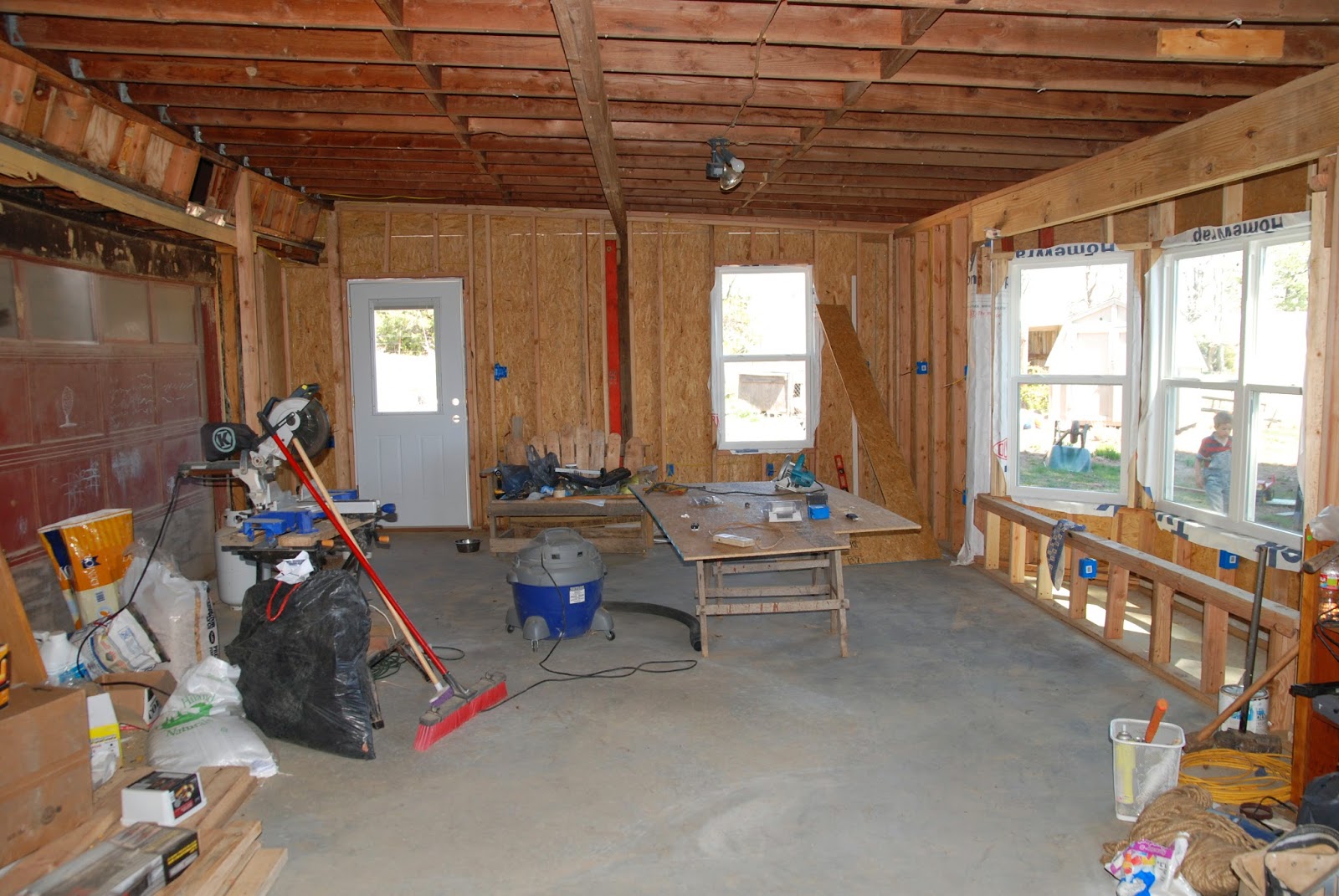 From inside, today.
Posted by MamaOlive at 04:52 4 comments:

And we have a door!

Well, I kinda gave away the punch line in the title, but here's the rest of the story.

Taryn had an allergy shot today, so it was back to town with us. Bob thought he'd be smart and look at the Lowe's in Rogers, since we hadn't been there yet. On the way we stopped at a small independent construction store, and they had some possibilities, but the one we liked best was a $650, and it wasn't perfect. So we went on north to Lowe's of Rogers. They didn't have anything new, but did have a few "rejects" that all opened the wrong way.

While there we looked over the door catalog from the little store and decided to go to Home Depot of Rogers. At Home Depot they had the same basic display as at the one in Fayetteville, but on the "reject" shelf they had a door that looked promising. So I flagged the cheerful young man to look up the price (it didn't have a price tag). He scanned it with his phone, and it came up blank. He got his co-worker's phone, and it didn't find it either. He tried the item number, and the search feature, and kept coming up empty. So I got MY phone out and scanned it with Google goggles (an app I have), and it found it on some shopping website as a Home Depot product "out of stock in 29 stores near you." It showed a price of $249. He looked at my phone and said that would do, and went to get us a cart. We had a winner! He helped us get it on the cart, and cut off the plastic wrapper.

We took the door up front and went to look at paint. After much deliberation we picked a sunny blue paint, then the right base for it, and went to wait at the paint counter while the employees there showed their lack of sequential thinking. We puttered a little more and went to check out.

The only lanes open were "self checkout" lanes with no scanner "guns." hahaha. The attendant had a scanner, so rang up the paint (was supposed to be $5 off and wasn't, but I didn't quibble), and went to scan the door when she noticed a "will call" sticker - meaning it was ordered and on hold for someone else. Oh, no! I explained it was wrapped in plastic so we hadn't seen the sticker before, and then looked at it - it was dated January. Well, she paged the door worker who'd helped us, but he was busy. So she called customer service, and they didn't help.  So she helped another customer, and then the guy called her back. She said the door has a sticker on it, and he said it was okay. So she shrugged and scanned it. But the bar code registered as invalid. She tried again. She paged the guy again. He called back again. He told her to just ring it up as a clearance item, and cost of $278. It had been awhile, I guess he forgot it was supposed to be $249, but it was still cheaper than just about any entry door we'd looked at, and we did like it, so we didn't say anything. She apologized for it taking so long and thanked us for being patient. And "Bob's your uncle," we were done!

Then the older girls and I went into Target while Bob rested in the van with the little ones. We hit some of the advertised sales, and got some chips. The shopping done, we went looking for a restaurant. Somehow we decided to check out the Rib Crib in Springdale. I got a menu from their website, but it didn't have prices, so Bob and I went in to see. I glanced over the menu, noticing the $11-18 price range and no kid's menu. Then a server came up and Bob asked about a kids menu while he asked if we needed a table for two. Prices there were $4-6. hmmm. I asked if there were any specials today, and he said "kids eat free." He verified there were no disclaimers. We called in the gang. We finally all decided on our food, but the burgers on the adult menu come with two patties, so Taryn asked if she could just get one patty, and he said sure. He also offered to mix Sprite and HiC for the boys' drinks. It was a little slow as they were short handed, but we needed the time to rest and relax. The food wasn't the best ever, but it was on the good side of the scale, and the portions were generous. When it came time for the kids' free ice cream the waiter informed Taryn that since she wanted a small burger, he'd rung it up as a child's plate, so she got ice cream, too! Then he came out with (in his words) "the longest, cheapest ticket I've ever seen." $23.50. For 10 people to eat, with soda and ice cream! Most of us had ribs, and there was some left over after we were all full. Unbelievable. We will be back soon, I'm sure.

Just two stops on the way home, for butter at Braum's and milk at Harp's grocery (and fuel while I was in the store). Phew! Home by 9pm. Achievement tests tomorrow morning...
Posted by MamaOlive at 04:36 3 comments:

Windows and doors and movies

Monday Taryn went for her allergy shot and I had a dr appt. Got to hear the baby's heartbeat and do all that other fun stuff of a first OB checkup (blood draw, pap, etc). Then, since we were out, we popped into Lowe's to buy door for the new living room. There are several Lowe's stores in the area, but the one we usually go to is known as "North Fayetteville". We looked at their door, with lots of banging and fighting in the background (some crazy people took a whole herd of children in the store!!). Eventually we decided on a front door, and then went to get the back door we'd noticed on our last trip. Except now they didn't have that door in stock. As a matter of fact, even though it was still on display, they don't even stock it at all. A similar door, also displayed in the 36" width, was in stock as a 32" door. sigh. Bob thought it would be more convenient to get both doors at the same time, so we went to the front desk and had them check if any other store had the back door in stock. Several of them did, but the closest was the "Springdale" location, and they agreed to hold it for us.
After supper (Zaxby's, I think) we went to the other Lowe's and our back door was waiting for us. So then we went to get the front door we'd picked out. At North Fayetteville it was in stock and cost $322. At Springdale it was a special order and cost over $400. foiled again! Well, we bought the back door anyway and discovered only one would fit in the van at a time anyway.

We took delivery of our windows on Tuesday, and then spent the afternoon hanging the back door. :) There was a little hammering and lots of caulk/adhesive, and it went in!

Wednesday we took some stuff to the recycle center, taking advantage of their "free bulky waste" week which was in the newspaper over a month ago and not since. I also got in the garden again, helping the children plant lettuces and carrots.

Today Taryn needed another allergy shot, so we were off again. I thought we'd make a quick in-and-out stop at the North Fayetteville Lowe's to grab our front door, but Bob got creative. But first we had lunch at Wendy's. As we turned in we noticed the sign in the driveway declaring 99cent kids' meals with combo purchase, so we all picked out our combo choices and went to order. Except, the sign was for Backyard Burgers next door. So we had to fall back and regroup. Ordered off the value menu. Fed 10 people on $25.
After the shot we went to a feed store for a little grain for Dinner, our beef cow. While Bob waited for the warehouse people to get his order, we watched a worker load 9 flats of tomatoes in the slowest possible manner. It was starting to feel like this wasn't going to be a good day in the customer service department.
Bob thought it would be fun to go to the South Fayetteville Lowe's to see what they had in stock. We got some tomato plants and garden soil, then looked at the doors. They had the door we'd picked out before, but now Bob didn't like it. So we almost decided on another one that was special order... Asked a worker if it would be in stock at another store, but he pointed out that all 15 of the special order doors on display had the same model number and couldn't be checked on. yeah.

To rest our weary feet, I went to Aldi and got a few veges.

Then we went to a guitar store and bought a case for Cedwryck's mandolin. Then had supper at AQ Chicken (delicious as always). Then, just to shake things up, went to Home Depot. They still have the race car carts! Riah remembered them from Abilene. Daniel cried when we left because he liked it so much. They had the same garden soil on sale at Lowe's for 50cents less per bag. They also had two doors in stock that were acceptable to me, but Bob didn't feel an overwhelming connection to either of them. sooooo...

Back to North Fayetteville Lowe's. This was a quick in and out, but got nothing except the special order book for doors. We just aren't decided. Drove home in a fantastic thunderstorm, part of the way behind a man who was going about 15MPH (in a 35 zone), occasionally coming to a nearly-full stop halfway over the center line, and then swerving over the white line, nearly hitting a traffic cone. Yikes!

Movies... just one, actually. We rented "Frozen" and after Bob and I watched it, we all watched it together. I've read reviews pro and con (mostly pro), and while there are some reservations (can a person save themselves?) a person can pretty much take away from it what they want to. Personally, I thought it was a good illustration of 1John 4:18 "There is no fear in love; but perfect love casteth out fear: because fear hath torment. He that feareth is not made perfect in love."