But feel free to jump in if you know. 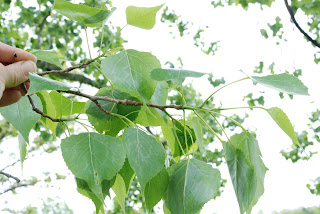 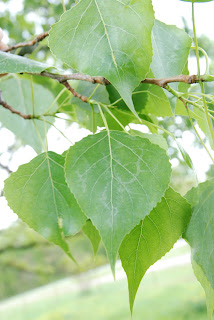 These two are Mystery Tree #1. It's the one beside the clothesline. It puts out super-sticky seed pods before the leaves come out.
.
. 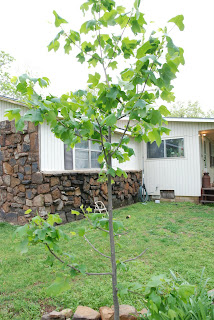 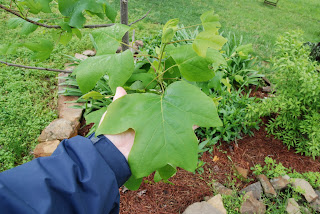 These two are Mystery Tree #2. It's in the flower bed between the clothesline and the house.
.
.
.
. 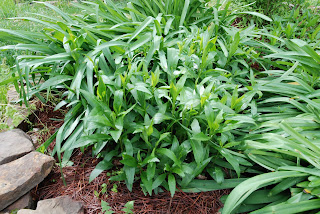 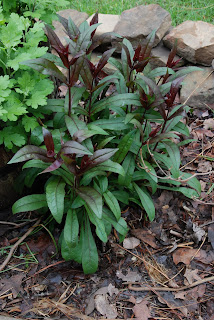 It was a long four weeks in some ways. I only read through Proverbs - 20 books in 28 days. But it was good for me. So, to catch up on the last month:

Bob quit his job at WalMart, as they put him on night shift and wouldn't take him off. The job involved endless climbing of stairs, and while he lost some weight, he couldn't walk on his days off.

We started work on our future master bedroom, since it's stayed wet under the house and Bob can't go hook up the plumbing on the future master bathroom that we'd already started on. We cleaned it out, masked off the fireplace (the chimney for the living room fireplace - this room was an add-on), and got the first coat of paint on the ceiling. While it was drying we went to Lowe's and picked out the colors for the walls and trim, and new crown molding. The next day we went to apply the second coat to the ceiling (the room was unfinished and will take 3-4 coats), and discovered the roof was leaking. So I called the insurance and Bob called a roofer, and we didn't paint.

Which leads me to point 2. It's been raining. A lot. For nearly a week. Our driveway has washed out, our rain barrel is full, all the trees have leafed out, and the grass and cool-weather crops are shooting up like rockets.

We have chicks! We got 20 Red Sex Link girls to show for a 4-H fundraiser (they were free, but we'll only keep 4 after the fair). Then a week later we got the chicks I'd ordered from Sand Hill Preservation Center. I ordered 25, they sent 27, and one died the next day. It was an assortment, and I got Anconas, Black Leghorns, Red Leghorns, Blue Andalusians, and Red Pyle Cubalaya. The RPCs are uncommon, and I can't get a lot of info on them, but the others are all heavy layers of white eggs. I appreciate the heavy layer part, but I think they'd sell better if they weren't all white. I've ordered a late season super assortment as well, so we'll see how that goes. The ages of the two sets were pretty close, so we dumped them all in together (in a large box in the garage). They are doing well.

It was a busy month, and I'm not gonna get all the details in one post, so I'll stop there. Look forward to seeing you more, soon.
Posted by MamaOlive at 13:08 1 comment: Links to this post