Just as I logged in to write, Google popped up a thing for me to search for a domain name and "connect instantly." So I searched for "In the olive grove" and it came up with various versions of "inCambridge" (.net, com, etc). It wanted me to buy a name, so I said no thanks, but why does it think "olive grove" sounds like "Cambridge?" (Insert smiley face that scratches its head.)

We have decided on a flooring for the living room. We may eventually cover the whole house with it; not sure exactly what Bob thinks about that, but that is my "plan." Practicality took precedence over ideals, and we picked out a decent-looking laminate that's only 99cents per square foot and has a 30 year warranty. Yes, real wood lasts a lifetime, but has to be nailed down, and with our circus (I mean, family) it would have to be refinished every year. The laminate will "float" over a thick pad that should absorb noise, moisture, shock, and temperature.

Having made that decision we are starting to trim the living room (window sills and such - of course the baseboard will wait until the floor is in). Bob plans to go tomorrow to a mill in Mulberry to pick up some cedar boards for that project. He kept wanting to buy some at Lowe's, but I finally convinced him to look at it, and a board that costs $8 at Lowe's is $2 at the mill. And when you're getting 30 of them, it's worth the trip (even if you have to dig the trailer out of the mud to use it for said trip).

Yesterday we spent all day in town. This was partly to allow the root killer we poured down the drain a chance to work, and partly to get stuff done. We went to Lowe's, Sam's, two parks, the allergy clinic, and an auction. At the auction we bought a gorgeous roll-top desk, for something like 20% of its original store price. It should replace our old red, sticker-covered, half refinished desk that we've had for 12-15 years (depending on if you believe Bob or me about when we got it). The red desk is very much like the red desk my parents have had my whole life, so in a way I hate to see it go, but the roll-top is definitely a step up.

This week Ruth got her two bottom teeth and learned to sit herself up. She is already showing signs of wanting to pull up, though she is very unsteady on her feet when we hold her in a standing position.

At Lowe's yesterday Daniel asked where we were going, and I said we were going outside (garden center). He looked upset, so I asked if he didn't want to go outside. He said, "No, because I am hungry. I am NOT tired." He is very good at talking about his feelings, and will often refuse to answer a question because "I'm mad!" If anyone cries he will ask them if they are fussy. He's doing this less now, but if I laughed at something he would ask "Are you funny?"

We also bought 2 maple trees. I hope they do well; I've always liked maples, and we need a couple of shade trees.

That will have to do for now. Typing makes my pinky sore. :) I think I need a new keyboard.
Posted by MamaOlive at 02:31 2 comments:

I didn't say anything before, because I didn't know what to say about it, but:

Recently (I think it was before the quick trip to OK) I went to my doctor to discuss a mole that worried me. Its growth was recent, and it seemed to be growing, though I didn't have evidence to prove it. (I'd talked about taking a picture, but never did.) Then it started itching, which is a bad sign, so I made an appointment. I didn't know what the doc would do, if anything. She cut it out, right there in the office, and sent it to the lab. I wondered. I checked my online medical records. I waited. Then got a call that the pathology report "showed some changes" and I should see a dermatologist.

Monday, while I was shopping (more about that later), the dermatologist called and scheduled an appointment for today (Wednesday). So this morning I got up early (after staying up late and getting up 3 times with Ruth), skipped coffee, forgot vitamins, and drove to Springdale in dense fog. Naysha went with me to look after Ruth. Filled out paperwork and went back to the doctor. He asked if I had the report, and I said I though he had it. So they called my PCM, faxed over a consent form, and got the nurse to read the results to them over the phone. I think he said it was a "Dysplastic nevi," but on the mild side. He said it wasn't "pre-cancerous", but was considered a marker for melanoma, so I need to stay vigilant, but not worry.

Seems like the PCM could have called him for his opinion and just relayed it to me, rather than refer me to them for an office visit. Oh, well.

It just so happened that I saw an ad in the paper yesterday for clinical trials for a new acne product, and it happens to be run by this same dermatologist's office. So I signed Taryn up to be screened to see if she's bad enough to qualify.

This week is a Rhea Lana sale. Children's consignment, done every couple of months. That's where I was Monday, with all the girls and Daniel. We got Taryn's allergy shots, went to Sam's, then to the sale, where Taryn locked the keys in the van. Bob took the boys to change the oil in the car (free changes for life at the lot where Zach bought it) and was at an auction when we discovered the key problem. So he came to rescue us, about a 40 minute drive across Sunset/412 in evening rush hour traffic, but wasn't too put out since the auction was unbearable anyway.

At the sale I found 8 dresses and 4 pajamas for Ruth, 4 dresses and 3 tops for Ella, 4 pair pants for Cedwryck, a dozen books, an Exersaucer for Ruth (she loved it! - stood in it and cackled the whole time we were waiting for Bob), and a Fisher Price barn for Daniel. I was going to save it for a gift, but he saw it and was insistent on having it. All for $148.

Today, as the Dr wasn't far from the sale, we went back. Got a couple of pants for Riah, some toys for Ruth, and 5 brand new card games; less than $20.
Posted by MamaOlive at 02:22 4 comments:

Saturday night I learned that my favorite cousin on my mom's side was in Oklahoma visiting my aunt who had had hip replacement. Since I hadn't seen this cousin in about 18 years, I immediately started scheming.
The long and short is that we left home after breakfast Monday morning, drove 4 hours (with only 1 stop for lunch) to my parents' house, where we stretched and visited for 30 minutes. My sister arrived, and she, Bob, T, N, Ruth, and I got back in the car for the 30ish minute drive to Aunt's house.

In short, it was worth it. Cousin had her 18 month old with her. We visited for about 2 hours, then back to mom and dad's, where BIL and nephews joined us for supper. Played chicken foot dominoes after supper, then sister's family left and the children went to bed.

Had a nice chat with dad, then we went to bed.

They had to work today - Tuesday - so we made our own breakfast, straightened up a bit, and came back home. Had to drive through rain and dense fog on the way home, but it was warmer than it has been, so no ice.

I feel really good about the trip. Cousin connected easily, and I felt closer to sis than I have in a long time. I'm writing as quickly as possible because Ruth is waiting to go to bed. Also I think it's appropriate to the topic of a mad dash down the hill to Ok. :)
Posted by MamaOlive at 04:42 2 comments:

Just when I was getting back to the blog, we rearranged furniture and disconnected the computer. but it was not for naught. :)

Bob also installed some light fixtures, but I don't know if they show up in the pictures.
\ 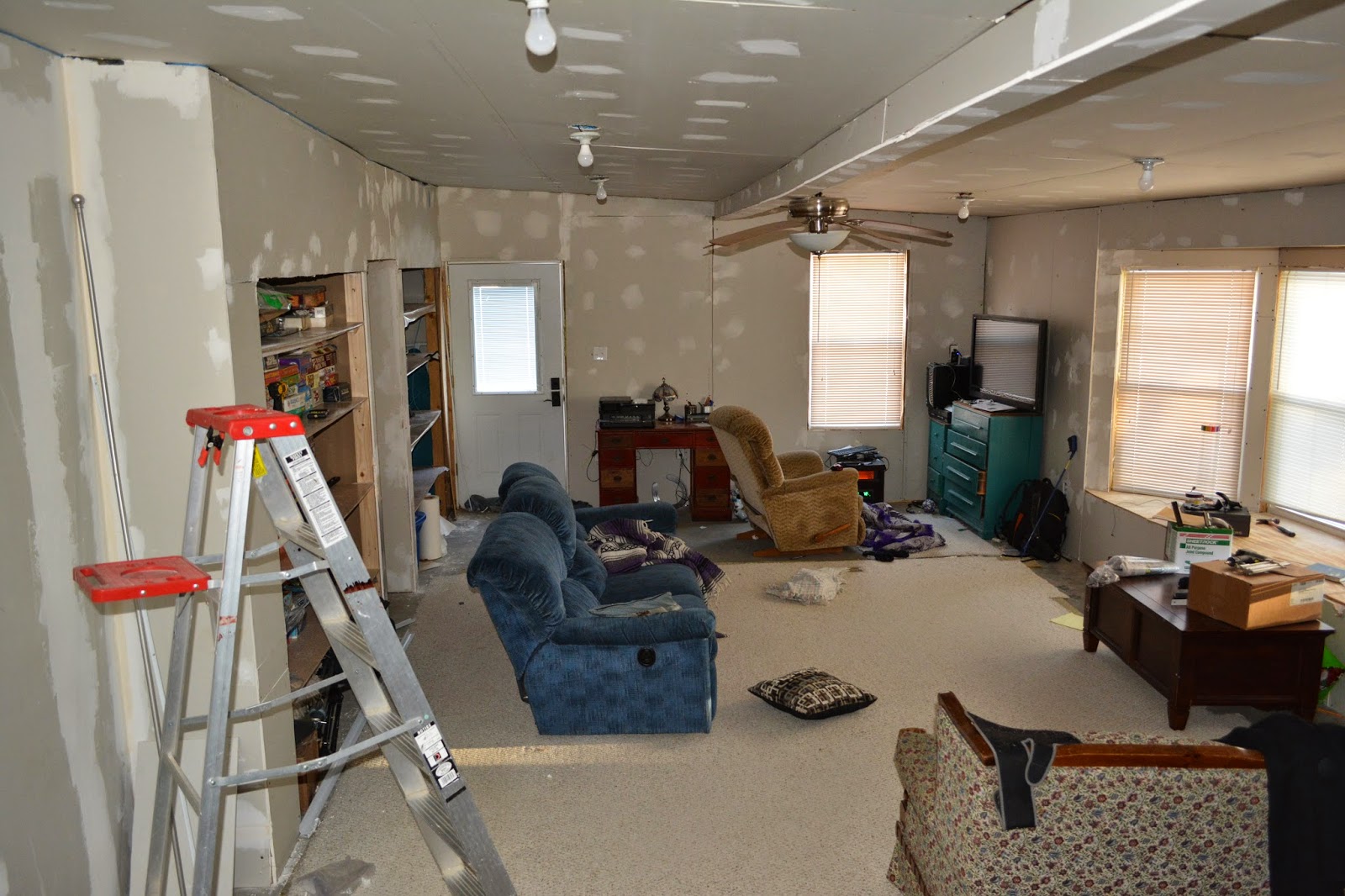 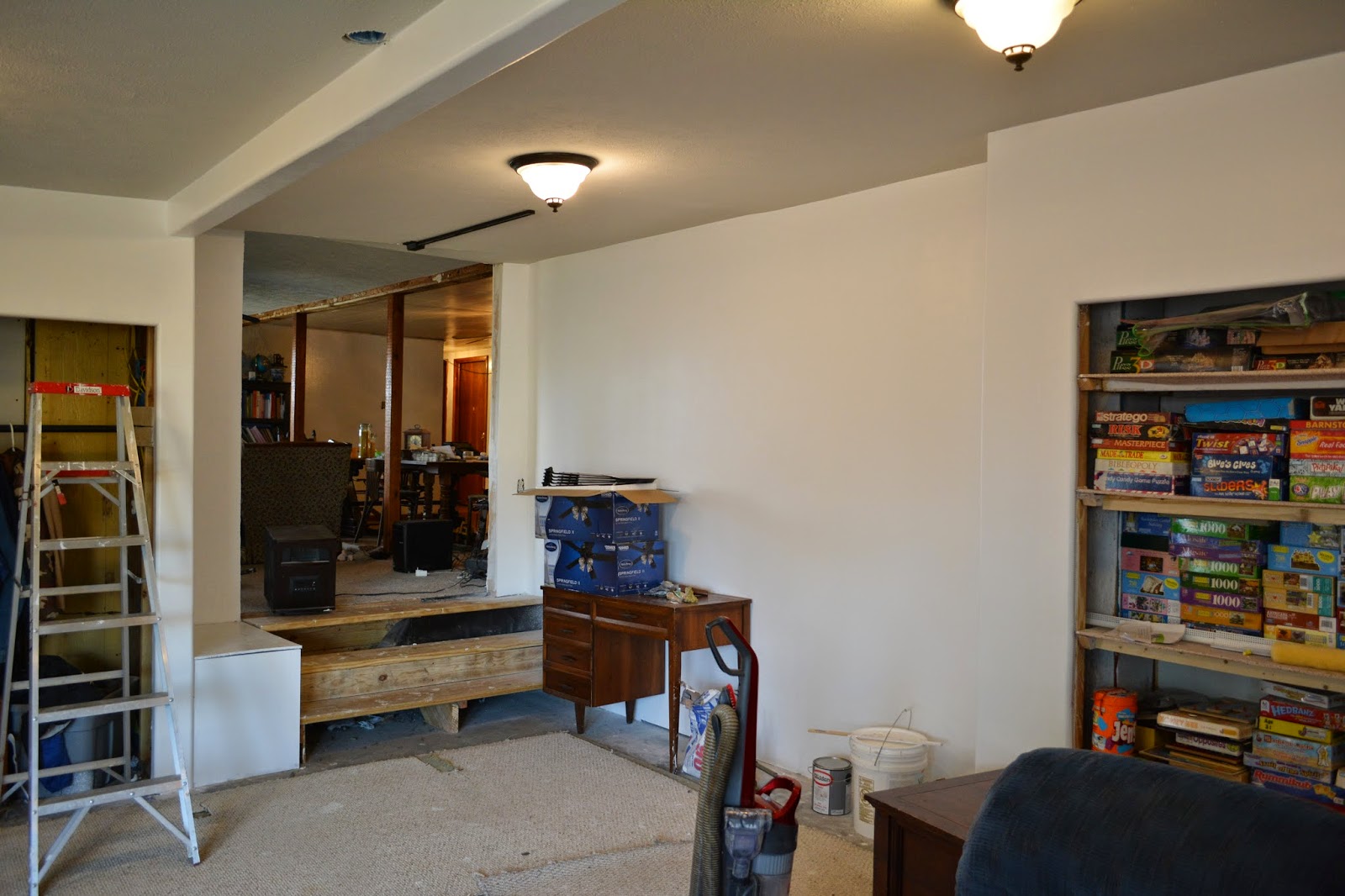 mostly after. we have ceiling fans now, too.