smarter than the average 4 year old

The other day (sorry; that's an inside joke. My dad uses the phrase "the other day" to mean anything from yesterday to 25 years ago) we went driving around and ended up at Eureka Springs. We went up to the Passion Play area, all closed for the winter, and some of the brave ones walked out to the Christ of the Ozarks statue. 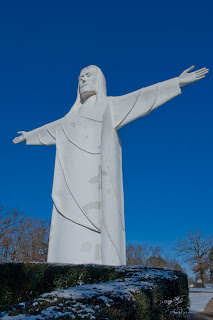 As we were slowly driving back out past the little church, we stopped to look at what appeared to be a sign. There were some words in German, and then it said "Psalm 23." One of the boys asked "What's that?" And Ella - 4 years old and can't read in any language - said, "The Lord is my shepherd, I shall not want." Stop for a second and let that sink in. The sign was actually a part of the Berlin Wall, according to information on site, and after contemplation I think it probably was not verse one, but rather "Yea, though I walk through the valley of the shadow of death, I will fear no evil." Either way, Ella was pretty tickled with herself and went on to quote about half of the chapter. I still have no idea why she thought of saying that.
Posted by MamaOlive at 03:26

And sorry I have been forgetting to identify myself.

The more I think about this, I think Ella must have "read" the numbers -- she does recognize some numbers -- then associated "23" with the Psalm she had memorized about the Lord since she was by a statue of our Lord. She is a bright girl. mums

She really is a smart one. I really enjoyed talking with her the last time I visited.

Then again, I've always believed most children are smarter than most adults give them credit for... :-)

I dunno, Mom. She IS smart, but it's more likely "coincidence" than reading.