Today we actually did something interesting. :-D

Last Sunday's paper had an article about upcoming events at Pea Ridge National Battlefield, and by much deductive reasoning and searching of websites I was able to discover the times and locations for the events. (I'm so proud of me!)

This morning, in downtown Bentonville, there was a reenactment of a skirmish that occurred on this day 150 years ago, very close to the spot on which it occurred. The days following saw larger battles fought in Pea Ridge (but the national park service doesn't allow reenactments in the parks).

So this morning we quickly did the chores, had toast for breakfast, and took off to Bentonville. (It's about an hour's drive.) Of course, the main street to the town square was under construction, so we had to take a detour, but that led us to a parking lot from whence we walked to the square. The side we first approached had a podium set up (you know that means the platform, right? I looked it up) and a small band of men in Union uniforms were playing and singing. The street was roped off, so we found a spot just behind the rope and waited for things to start.

(Riah had to go to the bathroom, so I took him inside the courthouse for relief.) We weren't there long when a group of children, led by a multi-pierced middle aged woman, squeezed in front of us and sat on the curb. When Bob went to the end of the street in search of a better view, the children got pushed a bit and ended up not in a good position. We were also in the shade, and it was pretty chilly. So we moved across the street to the sun, and the children mostly sat on the curb like all the other children there. (According to one of the speakers, there were 2000 children from the Bentonville school district. There weren't a lot of non-school people there at all.)

Some people stood up on the podium and gave speeches that we couldn't hear much of, and then the lectern (which appeared to be a substantial piece of furniture) rolled off the podium and fell on the legs of a little girl who was sitting there. (Yes, the lectern had castors!.) She appeared to be 8-10 years old. Several adults rushed over to her and the speaker asked for paramedics. Some men in uniform showed up, but we couldn't tell if they were police, firefighters, or EMTs. After several minutes they got the girl to her feet and she limped away.

Then the show started, on the other side of the square. We heard gunshots, saw smoke, and some soldiers on our side ran over there. The speaker gave a narration, but we couldn't hear him. We stood there and tried to pretend we were civilians at the time - we wouldn't have had any idea what was going on, just hearing the shots and distant yells. Eventually the fighting came to our side of the square, but as we were at the end of the street we mostly saw the backs of the soldiers. Anyway, we enjoyed the performance. From what I have gathered, the Union had taken the town prior to this fight, and the Confederates were trying to liberate it, but were unsuccessful. The later battles at Pea Ridge are considered the greatest turning-points of the war West of the Mississippi. 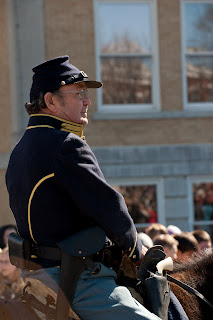 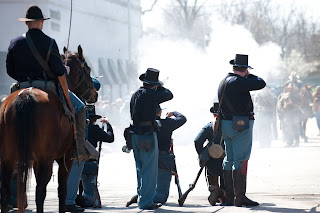 When the show was over we walked across the square to the Sam Walton/WalMart museum. It was pretty nice, if a lot of propaganda for WalMart. They had some neat looking toys and candy in the cafe and gift shop, but we didn't stay to look.

Then we drove to a nearby city park, where we had our picnic lunch. One school group (ages about 12-14) was occupying the playground, so we just played in the grassy area by our picnic table.

Then we turned toward home, stopping at a Tyson outlet store that I'd just heard about. Mostly they offered breaded, flavored, or pre-cooked meat, but at the end of the freezer there was boneless skinless chicken breasts - 20 pounds for $28. So we got a box of that.

Then we passed the home appliance store, so Bob did a sort of U-turn into a gravel area on the far side of the road. As he was waiting for traffic to pass, a policeman pulled into the turn lane and gave him a dirty look. Sure enough, he turned around, too, and followed us to the appliance store. He stopped Bob for "improper use of a lane" - he said we were blocking traffic (but we weren't - a semi went past us). Anyway, he saw that Bob had a clean record and let him go without a ticket.

We went into the store and looked at freezers, and then we came home to put the chicken in our freezer and decide where to put the new deep freeze we will buy.
Posted by MamaOlive at 04:15

Don't you love newspapers that only give you enough information to make something sound interesting, but not enough to actually get you to the event at the proper time and place? Further research needed.
Or the newspaper tells of an event just past - no chance at all to attend. On several occasions, I've scoured the previous days newspapers to see if I had missed the announcement of the event -- nary a mention of it!
End of soapbox speech.
Glad there was no fine for Bob. Good buy on the chicken.
mums

Actually, when I first read the article I thought it had passed. It was in Sunday's paper, and spoke of "Friday" and "Saturday" - no dates mentioned. But it wasn't written past tense, so I guessed that it *might* be the coming weekend.
When I looked at the official Pea Ridge website, it only listed a few of the events, but had no times or locations. I had to confirm the schedule through an independent history-buff website. I really think Friday's event was only publicized to the area schools.

I won't defend the crappy small-town newspapers (most of them could do SO much better)... But to be fair, they're often not notified beforehand of events.

As for the article Shari read, they should have never printed it without getting the times and locations and being specific. The whole point of a local newspaper is "to tell the people what's going on". If they can't do that, they should close up shop.

As for the website, we've had very similar experiences, and the folks who run the website should be embarrassed. It's. Not. That. Hard. To. Update. A. Website.

Glad you all had a good time!