I recently signed up for a program whereby I receive free books (of my choosing, from a limited selection) in exchange for the writing of a review. So I choose The Grace Effect by Larry Alex Taunton. 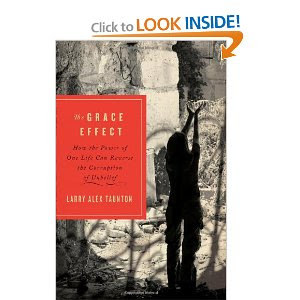 My first impression was that the cover feels dirty. The red box on the front and the back cover are nice and slick, but the B&W photo has a gritty texture that I kept wanting to wipe off. But of course we mustn’t judge a book by its cover.
It is a good read. The book goes back and forth between an adoption story and musings on the effect of Christianity on civilization. I found both points interesting, but what kept me coming back to the book was the story; I wanted to know what happened next. (Yes, Ganieda, that’s how I read a book – deal with it!)
Is it well written? Well, I’m being super-picky here, but parts of it weren’t. I was looking for a quote to illustrate, but now I can’t find it. It is revealed at the end of the book that it is based on real-time blog posts, and was written quickly to get the thoughts on paper while they were still fresh. I understand the reasoning behind that, and it explains a lot of the tone of the book, as well as grammatical errors.
What’s the point of the book? Well, without giving any spoilers, it addresses the question “Is Christianity a good thing for society?” And it gives us affirmative evidence in the form of a first-hand account of a Ukrainian adoption. I agree with the author’s thesis, and as much as I enjoyed the narrative, I don’t think he made his point quite as strongly as he felt he did. I do plan to look for more books by this author to learn more of his apologetics.
Extras include a nice study guide at the back of the book as well as a thorough bibliography and a few family pictures.
Posted by MamaOlive at 16:22

This often happens when people think that anecdotes and examples are 'proof'. :-) You come away with a good feeling, but realize that it was just a story after all...

If by Christianity we mean people behaving lovingly, kindly, and helpfully -- to the point of self-sacrifice, then I think almost everyone would agree that it's good for society.

But if the word refers to the existence of the church as an organization, you will find a lot less agreement...