For my Nutty Celtic friend 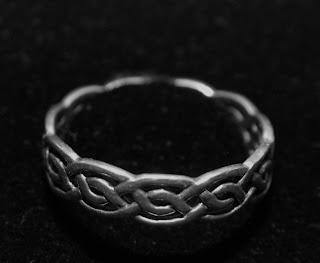 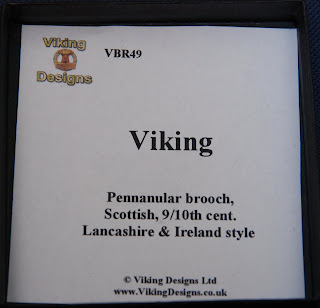 I'm gonna try to put in a few pictures.

Okay, the picture is above the text... This is my new Pennanular brooch. 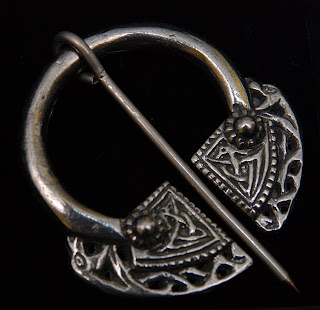 Next... Hmm, that one is above the last! No wonder I don't do pictures in my blog. The label from the box.

Also I have the pennanular that Bob made for me when he took a blacksmithing class while we were in Iceland.

And just for fun, the ring Bob bought me while he was in Iceland TDY earlier this year.

Oy! I was able to move one picture to its proper place, but the others stubbornly remained where they appeared. So from top to bottom:
the ring, the one Bob made, the label, the new one. :-)
Posted by MamaOlive at 20:29

Thank you!!! That was very sweet of you ~ especially as I know all about stubborn blog photos. :) They are lovely & I'm sure you get lots of pleasure out of wearing them. I love the knot designs. I must have a convulted mind because the knots always remind me of the great promises in Christianity ~ I am the alpha & the omega, the beginning & the end...low, I am with you always...for I am convinced that nothing can separate us from the love of God...

makes sense to me. :-)
The first time Bob saw me I was dressed in solid black and had on a necklace with a large pewter cross covered in the endless knot. He thought I was a wierdo! (Can't imagine why) (That cross, I got at Windsor castle the day before I left England the first time.)

lol. I got married in solid black ~ with a big black broad~brimmed hat on my head! I love Celtic crosses too even though I know the symbolism pre~dates Christianity but what I think when I see stuff like that is how God has set his thumbprint on everything so rather than Christianity taking to itself pagan elements, all paganism is infused with something of God's truth pointing the way to Christ. Pagans would just love me! :D