Edited to add: This is part of a series. The Vacation 2016 story begins here.


Thursday see Dinosaur and Stay 8-25 in Motel 6 Pocatello, ID (3 rooms);
Directions to Dinosaur:
NorthEast on 191/40 for 14 miles, then Left on 149, (later turns toward right and is co-named Quarry Entrance Road) then left into park.
Tour of the Tilted Rocks is an 10 mile (one-way) auto tour route along Cub Creek Road, starting at the Quarry Visitor Center north of Jensen, Utah. Guidebooks are available for a small fee at either visitor center, or at a self-service post near the monument's entrance station. Features along the route include petroglyph and pictograph panels, Josie Bassett's cabin built in 1913, and fantastic views of geologic layers. A short spur road takes you to the Split Mountain Boat Launch where you can see the Green River leaving Split Mountain Canyon or watch river rafters arriving after a several day journey through the monument. Wildlife may occasionally be seen, including mule deer, bighorn sheep, pronghorn, prairie dogs, and many bird species.The last two miles of the route are unpaved but well maintained

Memory serves as follows:
After a decent breakfast we went to the grocery store next door for water (we drank a case every day, besides what we could get free), then backtracked a little to get to Dinosaur National Monument. 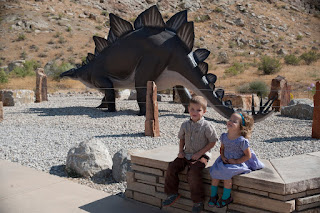 It was free admission for all, being the centennial of the National Park system. More crowded than it might otherwise have been, but tolerable. There were also Rangers about to answer questions, and a demo of a bird of prey, and a sun-spotting telescope (but was too cloudy to use). The quarry was about how I remembered it from 25 years ago. The children were impressed, but not terribly interested. We stayed long enough for some of them to fill out junior ranger activity books so they could get a prize when we left. Then we started on the self-driving tour, but pretty much only stopped at the petroglyphs before heading for a picnic site. 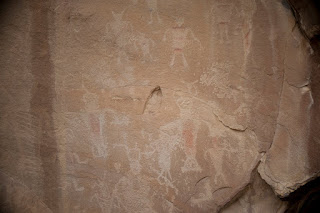 The school buses were just leaving, so we had a quiet lunch. Then, oh, joy! the boys got to climb a mountain. But we did have to call them back on account of the thunderstorms approaching. Back in the gift shop we collected the Jr badges, and bought a few souvenirs. 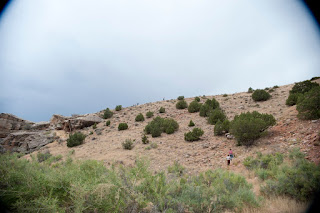 Back on the road, through Salt Lake City, which was a nightmare for traffic, and where we stopped for some real food - Cracker Barrel. We hadn't eaten there for several years, and it wasn't bad, but noisy, slow, and expensive (compared to picnics, anyway!). I bought a "yes and know" book in the gift shop - I loved those things as a child! After all the fighting of the road to get across town, we decided to skip Antelope Island and get on with it.

It was late, as usual, when we arrived at Motel 6. Check in was the fastest and friendliest so far, and our 3 rooms were next to each other, on the ground floor, and near the pool. Unexpected bonus: free wi-fi. We didn't expect much out of the rooms, so weren't disappointed. Again, we were too tired to bother about swimming. I think I did some laundry that night... No; they had laundry, but I had done mine the night before. Yep, our rooms at Days Inn weren't on the ground floor, but there was a laundry room next door to my bedroom. Those "commercial" washers they have at hotels hold about a third of a load, and take FOREVER to dry. But I survived.
Posted by MamaOlive at 21:40