First and probably oddest, we got snow yesterday! 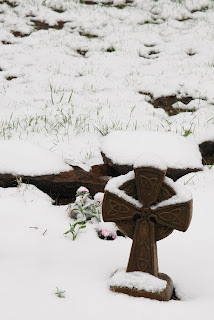 This is my front flower bed - you can almost see the dianthus blooms peeking through the snow.
Arkansas has never had snow in May before (since we've kept records).  My tomatoes made it through and still look okay - the newspaper said that if they are still just sitting there after 2 weeks then I should replace them anyway.

We had some time to talk in the car Wednesday (more on that later, maybe), and reminded ourselves that:
Bob and I both have a dad named Bill; both of them worked on airplanes; both of them have a brother Jerry.
We both have an Uncle David and an Aunt Linda
Both of our maternal great-grandfathers are named Arthur
He has an uncle with the same name as my last boyfriend; I have an aunt with the same name as his last girlfriend (before we met each other)

My eyes... I have always called them brown, though at times they look rather green, and at times even golden. But, this week, while trying to get dirt out of my eye, I realized that they seem to be turning blue around the edges. Taryn just took this pic. 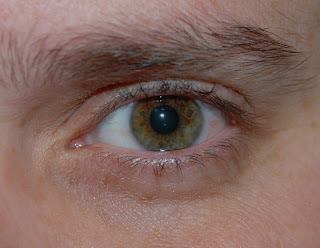 Interesting coincidences. I guess I'm getting batty in my old age; I don't remember a great-grandparent named Arthur... (and I lost my family tree files when my last computer went down; still haven't gotten a new file from Mom.) :-)

I've noticed there are days when my eyes are most definitely *gray* instead of blue. And the blue isn't always the same, for sure.

I remember when you were first born you had blue eyes. :-)

Very interesting similarities. However, I think you are mistaken about the great-grandfather "Arthur"...

Eye color does change as we age. But like you, I've always said my eyes were brown, but they've always been hazel (a golden brown), and do look green at times. mums

Really? What were your grandpas' names, then? now I'm all befuddled. There was SOMEbody Arthur in our family!

You do have an Arthur on your dad's side - 8th great grandfather Arthur Mosley. But I doubt you ever had that information as I have not researched this branch and I don't like to pass along stuff I get from other people without checking it out.

Thanks for confirming, Mom. I honestly couldn't remember Bryce's name, so I was beginning to doubt myself. :-)