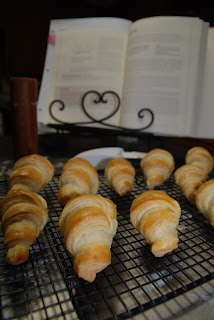 Today I made real, French pastry chef, croissants. Do you see those flaky layers? Pure awesomeness!

And a feeble attempt at a funny (I had the wording all planned out last night, but almost forgot the incident until something else happened today, which I did forget). Taryn has taken to making comic strip drawings of my conversations with Elijah.

Yesterday we were driving, and the children began chattering about an episode of Andy Griffith where Barney tried to sing "You get a line and I'll get a pole, let's go down to the crawdad hole," except someone thought it was a catfish hole. And the arguments flew thick and fast. The children were now correcting each other's pronunciation of "crawdad": frawdad, frog's dad, grawdad... So I said, "It's CRawdad, because it's so nasty it will stick in your craw." This stirred up a new buzz of arguments - it was like playing "telephone." Finally everyone was thoroughly confused, so I helpfully suggested that they call it a crayfish, since that is the same animal and that way there won't be such confusion.  Cedwryck promptly passed this information to those in the back seat who couldn't hear me: "She said it's a GREY FISH!"

I meant to add: the rolls look delicious! mums

Ah, the bread does look good.

Much better than gray fish. ;-)

Wil, I suppose you didn't like my choice of spelling. ;-) Just call me old fashioned.
http://grammarist.com/spelling/gray-grey/