It's times like this I wish I could REALLY write, instead of just throw words on the screen. oh, well.

We are planning to take a little trip - camping - to the coast. Haven't seen the ocean in two years, you know.  Bob had the brilliant idea of letting Serenity the dog stay at MIL's house while we were away. She has a large fenced yard, two big dogs, and it would be nicer than a kennel. So, every so often when we go into Springdale we will take Serenity with us and drop her off at MIL's for a few hours, to get used to it.

Friday was one of those times.  Serenity was excited to go with us in the car, as always. I leashed her and took her around to the gate; she was pulling the whole way. Once in the gate I let her go and she ran around to the back porch, where the other dogs were barking through the patio door.  I cheered her on, glad she appeared comfortable there. When I turned to leave she followed me back to the gate, and jumped up on the fence with her front feet. This worried me a little... When I went back to the car, she went around the house to the fence on the other side, closer to the driveway. Last time we left her, she had stayed in that spot almost the whole time, so I felt like things were okay. She again jumped up on the fence, and Bob began to worry. Then she paced around a little and looked very pretty and classic German Shepherd. We waited a little bit to see if she would try to get out, but she went back to the porch, and I saw the neighbor's dog come out to say hi (she'd played with it a while last visit), so I figured it was okay. Anyway, we figured the more we hung around the more she'd want to get out after us. So we went shopping.

A new Cabella's sporting goods store opened in Rogers last week, and we wanted to check it out. It's HUGE! (Like Bass Pro Shops). After a couple of hours we left and were on our way to WalMart when MIL called Bob's cell phone. Serenity had got out of the fence, hit by a car, and was being transported to the nearest vet.

We arrived at the vet to find a wet and damaged dog on a table, wrapped in blankets to dry and warm her (it had been raining). They hadn't begun an exam yet, and talked briefly about the options. We said to sedate her and take x-rays. She wasn't moving anything at the time; they said she hadn't moved her back legs at all.  When I started talking she lifted her ears up, so I know she was aware that we were there. We got the children in and settled before another storm broke. They gave Serenity a shot, and took an x-ray of her back and of her pelvis., then called us back to look. I knew when the nurse called us that it was bad news. She was holding back tears as she showed us the x-ray that showed Serenity's back was broken. There was nothing to be done but say good-bye.

The children came in one at a time and petted her or said "bye" or looked at the x-ray (all except Taryn). The oldest three cried quite a bit, as did I, MIL, and MIL's friend who had been on her way over for supper and stopped by the vet. Soon it was all over.  We requested the body, to be buried at home, and they bagged it for us; Bob loaded it in the van and covered the bag with a tarp we had.

wow. I keep getting mental images of her standing in the middle of the highway, hurt and confused.  I try to comfort myself by thinking that she couldn't feel anything because of the broken back Don't correct me if I'm wrong.

The children were surprisingly hungry, so we went on to eat, then finished our shopping, arriving home about 10:30. Saturday morning we had a funeral in the field, burying her next to Tiger.

We are mostly okay, but occasionally it will hit me or Riah that she's gone. 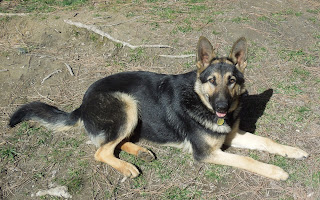 I'd like to believe that she's wrestling with Tiger once again, now that they are both beyond our world of pain.
Posted by MamaOlive at 06:29

I'm so sorry. I know how much it hurts. I know Jesus loves our pets too ~ after all he made them ~ & I do believe there is a place for them in heaven. Nearly all my cats have been very spiritually discerning & they knew who has Jesus & who hasn't. They love it when I've spent time with the LOrd. They sense His presence...♥♥♥

Sorry to hear about the loss. Losing a furry family member is always difficult, so much more so when it seems so untimely.

Though it was 20 years ago, I was reminded by your story of my trip to the vet with Harry (sometimes "Hairy" in my journal) in 1992, and the more somber trip back home.