So much for thinking I'd be blogging more when Bob's semester was over. My computer is showing signs of illness, and I've been trying to get my documents organized and my recipes printed. You'd think hitting "print" 160 times would be non-complicated, but many of the recipes were in conversation format, with many extra instructions, and pictures. One, for example, was 6 full pages in Word. I got it down to 1 1/2.

Today is Christmas Eve! Tomorrow we will go to church in the morning, and then have lunch with Aunt and Uncle Nextdoor and MIL and StepSon and whoever else shows up. So we did our family time today.

Bob and I managed to sleep in until 7:45. I was headed toward the Christmas lights when I passed the kitchen window and saw SNOW on the ground! Some people may think it was a heavy frost, but I've never seen frost that heavy. The last time (the only time) I remember having a light snow on Christmas Eve was my first Christmas in England. Both times it was just the icing on the cake.

Anyway, I pulled the cocoa rolls out of the fridge to finish rising (they are like cinnamon rolls, but with chocolate bread, and cocoa in the middle), and mixed up the oven omelet. We read the Christmas story in the Bible and got dressed. Then I thought breakfast was ready, but it turns out that the rolls weren't quite done. So we ate the omelet and chatted for a while, then ate the rolls. It was 10:30 by the time we finished breakfast!

Then we opened our presents. Bob got a new printer last week, so that was his present, though I also gave him a 1 pound Reese's Cup.
Taryn got a mattress pad, a slip, a song book, a Sudoku book, and some hair bands.
Naysha got a play doctor's kit, 2 books to read, a slip, and a bicycle horn.
Riah got a wooden sword, a building kit with birdhouse, sailboat and other stuff, some tools, and a Sudoku book.
Cedwryck got a sword, a build-your-own rubber band shooter, a book, and some tools.
Ella got a pillow backpack, a baby doll bed, a paint-your-own wooden doll set, a book, tights, and a Dot-to-Dot book.
William got a bow and arrow set, a sword, a remote-controlled truck, a book.
Elijah got a set of ABC blocks, a soft baseball and bat set, and a chunky puzzle. He also claimed every other present as "mine."
Bob got me a 25th anniversary Snowflake bear and some dark chocolate and salted caramel candy.
We had a few things that were for sharing, or for every body. Flashlights for all, Sonic toys via the cake store, a Wii game via McDonald's Monopoly game, a computer game, a set of activity books about knights, pipe cleaners, and a pack of door hangers to color.
My brother sent up a Wii game as well. Sorry I didn't send you a gift, Wil. I have a little something; maybe we'll leave it with Mom and Dad?

After presents we did our chores, including a short walk with the dog. It is a beautiful day; bright blue sky, crisp cool air...

After a while we will have a nice dinner - I've been marinating a lamb leg since yesterday, and will make the ultimate roast potatoes as well as other delectable sides, followed by a chocolate mocha log roll cake.

For those who aren't on Facebook, we got a kitten yesterday. She's about 3 months old, solid black, and is polydactal (she has an extra toe on each front foot). She was in a cage-free cat shelter, and hates to be alone, but doesn't like to be held. She just meows and rubs on our legs. She is very active, and wasn't scared of us at all. Her name is Blackberry, for the color, and the ability to send texts (thumbs).
We let the rabbit in for a while yesterday to socialize, and they took turns being scared of, and curious about, each other. 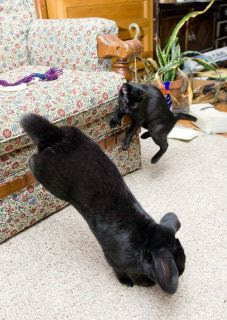 Merry Christmas! I'm glad you've had a good day and as always I enjoy reading about your busy lives. Love the picture of the rabbit and cat. mums

We also had our Christmas on the 24th. Hopefully there will be time to blog about it today -- the pictures are already up on Flickr.

And so for the New Year. Hope you have a blessed year.