A tale of two cakes

Riah's birthday was in late September, and William's was today.

Riah invited everyone he knew to come over for his party, and had me cook a feast for them, including a "castle" cake. He's had castles before, most notably the "Robin Hood" themed one in 2008, but this year he made it easy - he wanted one like Taryn had when she was 6. THAT castle is my Mom's fault - she made one for me at least 2 years when I was growing up, and she even made Taryn's that year, because it was just 2 weeks after Cedwryck was born. So I agreed to give it my best shot.

I started off with 2 9x13" chocolate cakes. Except the first one was cooling on the counter, minding its own business, when apparently someone walked over and sat on it. That was bad, but not a total loss, since one cake had to be cut up anyway. The second cake was therefore invested with all my hopes for perfection. It stuck to the pan. Completely torn in half. So what did I do? Left it there and went out to the flea markets in town with my parents, who were down for the party. Yes, the same mom who made the original and perfect castle cake that I was trying to emulate.

Anyway, time and frosting heal most wounds, and we ended up with this: 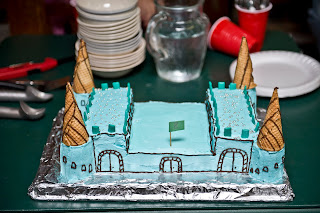 William's wants were a little different. His main goal for the day was to get to play Wii. He wanted to be home, with just us, and for his cake he wanted a car. He's had cars before, that being his main love in life - right next to puzzles. When he was little, he'd go to sleep with a Hot Wheels car instead of a stuffed animal. He had a pickup one year, and a car last year (not sure of the other year; it's written down in my cake book that's still packed in a box, in the building). Anyway, I wanted to do a "3D" car, not just a picture of one. Taryn and Naysha made the batter - a peanut butter cake, which turned out to be the perfect consistency for making a shaped cake - and Bob came up with the basic design of the cake. All I had to do was frost it.
It turned out looking way better than this; I know Bob's camera did something to make it look all smudged like that! I was so proud... 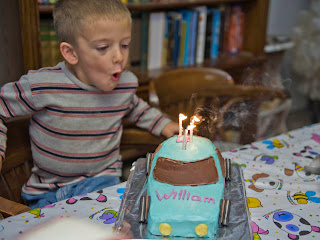 The writing was supposed to be purple, but looked pretty pinkish in real life. William didn't seem to mind.
Posted by MamaOlive at 04:16

Please let all the children know how sorry we are that we can't get to all their birthdays. We estimate 20 hours driving time *per* birthday, which is 140 hours.

And we apparently lack whatever skill it is that you and Bobby have -- the one that allows you to take amazingly long trips with many children and small children. :-)

By the same token, I can't truly express how thankful we are that all of you came down for Rebecca's birthday party. It was so clear to me that her most enjoyable part of the trip/visit was playing with and talking to your children. (A close second was exploring Heather's house the following morning.)

I think the children understand it's simply too far from your house to ours for a 2 day trip.

As for skills, I don't know that we're terribly gifted. When Taryn was small we mostly expected her to behave and ignored her when she fussed excessively, something that I don't recommend anymore. When Naysha was small, we turned our 6 hour trip from Abilene into an 8 or 9 hour trip, stopping to comfort, feed, and change. After that, Taryn was old enough to handle quite a lot of what went on in the back seat, so we didn't have to stop to deal with it.

Anyway, our round trip this time was just 8.5 hours - it took a half hour longer to get home because of the driving rain. :-)