Voting:
I'm still (or again) undecided on my choice for President. In Arkansas we are not allowed to write in our choice. The people on the ballot are: Obama, Romney, Johnson (Libertarian, former Governor of New Mexico), the Green Party candidate (Jill Stein), and the Socialism and Liberation Party candidate (Peta Lindsay). I'm not voting for Obama or the Green girl or the S&L party. So that leaves me with Romney and Johnson. I know Johnson won't win, and am inclined to vote for him just to "stick it to" the Republican party for the way they cheated Ron Paul out of his hard-earned place at the national convention (and hopefully send some sort of "message" about appointing a left-leaning candidate). But then, Romney is closer to being pro-life than Johnson is; could I really vote for someone who thinks it's okay to kill people who cannot live independent of  medical devices? But then Romney thinks it's okay to kill someone if their father is a rapist... But his running mate doesn't think so... And Romney isn't all about limited government and personal responsibility (ideas which I think are central to the USA as we know it), but I think he would do better than Obama is doing on many fronts, and (as I read on a blog the other day) better IS better. So anyway, I'm still waffling.

Daniel picture:
On a lighter note, and one on which I'm sure we can all agree, Daniel is gorgeous. 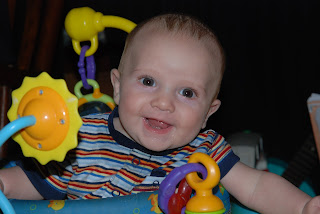 10 commandments:
At church Wednesday there were only 14 people (7 adults and 7 children, if you count Taryn as an adult), so it was pretty casual. We are on the 10 Commandments, and Jesse went around the room asking people if they could name one. When he called on William, William responded, "Thou shalt not drink." Laughter erupted, and I was glad William isn't as touchy as Riah was at that age. In his defense, we had just been talking about the election and the possibility of Madison County going "wet."

cooking:
We went shopping Tuesday and bought $400 worth of groceries (including diapers). Wednesday and today I've been cooking and prepping for the freezer. Put up 12lbs of chicken breast (trimmed, sliced, marinated - one set cooked for dinner), 20lbs of leg/thigh quarters (boiled with garlic, apple cider vinegar, and salt in water) which made 20 cups of cooked chicken and 12 qts of bone broth (more or less), 14lbs of ground beef (some just divvied up and frozen, 2 kinds of meatballs, breakfast sausage, and some cooked in water with onion which made 2-3 qts beef broth). Also made muffins for breakfast this morning and washed a bunch of dishes (2 DW loads each day plus a bunch of hand wash).

broth:
I used to think the broth from boiling chicken was a sort of by-product, and even started baking my cheap cuts for cooked meat to use in casseroles. But then I started reading Weston Price's work and learned of the value of a good bone broth (boil the bones for 24 hours to get all the minerals out), and so now I'm making broth on purpose and the meat is the "extra" part. :-)

bake sale:
Last year for Christmas we gave money to World Vision based on their gift catalog. This year we will give through Christian Aid Ministries for reasons I won't get into here. But we want to do more, so we've decided to hold a bake sale to raise money to send. We will be at Walmart the Tuesday before Thanksgiving. Should be fun.
Posted by MamaOlive at 04:21

I completely sympathize with you on the voting decision quandary (for different varying reasons, I suppose).

I run into this pretty often, as you might guess.

None of the candidates would agree with me on a majority of the issues. Some of them change their views daily, trying to get elected. Others (as you noted) have zero chance of getting elected.

One, despite his views that oppose some of mine, hasn't acted on those views and has done quite a bit of good in the meantime. And he hasn't changed his views randomly, so I like that.

(If I actually listed all of my views on each issue, not only would it be too long for anyone to care about reading, but no one would agree with me on anything. :-)

Wil, I assume your last candidate description is of the incumbent. Would you mind sharing what good you think he has done in the last 4 years? So far I've gotten 2 responses to that question on Facebook (Evan likes Obamacare and a childhood friend of mine likes what has been done with the FHA). As Cassie and I said to each other, we each tend to find news sources that support our own points of view, so those who don't support a candidate are unlikely to ever hear of any thing good about them.

I mean what he has done that you think is good, not "what good you think he has done" as previously stated. His actions are documented; it is our opinions on them that are subjective.